A rapid increase in the number of patients with dementia has become a global issue. A cognitive function assessment using neuropsychological tests is useful for diagnosis of dementia. However, these tests, which consist of questions administered via traditional “pen-and-paper” tests by physicians who specialize in geriatric medicine and dementia, require a long time to complete, imposing psychological burden on subjects.

Although it was important to develop easy techniques of cognitive assessment, it was hard to conduct efficient screening for cognitive decline because it was difficult to determine accurate cognitive scores using methods other than asking questions via these traditional “pen-and-paper” tests.

This group developed a novel brief and practical cognitive assessment tool using high-performance eye-tracking technology with short task movies and pictures to assess cognitive function. In this method, subjects simply view a series of short movies and pictures displayed on a monitor for 178 s while their gaze points are recorded by the eye tracking device. Thus, even seniors can be checked without burden.

As the eye tracking-based cognitive scores significantly reduced the subjects' psychological stress associated with the test and the scores from eye-tracking measurements correlated well with the scores from the conventional standard cognitive assessment, the scores were highly reliable.

This technique allows for efficient dementia screening, leading to early diagnosis and a delay in the progression of cognitive impairment and allowing even general practitioners not specialized in dementia to administer cognitive tests for their patients. Since this new technique enables quantitative and objective assessment of subjects’ eye movements and gaze positions and does not require language instructions, it will become a global standardized cognitive assessment test beyond any language barrier. Cognitive decline can be delayed through early diagnosis and timely intervention; thus, this technique will be useful in checking cognitive function in health checks for local residents and reducing traffic accidents involving senior drivers, which has become a social problem. 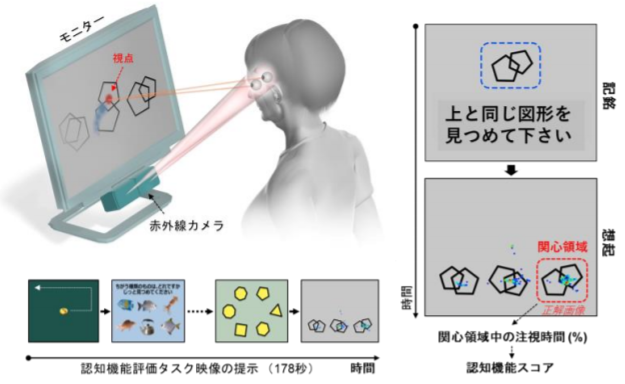 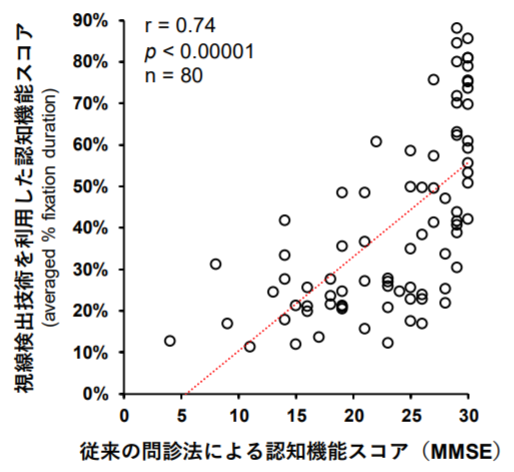