Success in affixing fluoropolymer to Isobtylene-isoprene Rubber without using adhesive

A group of researchers from Osaka University and Hyogo Prefectural Institute of Technology succeeded in strongly adhering fluoropolymers to Isobtylene-isoprene Rubber (IIR) without using adhesive.

In order to reduce incorrect administration of drugs in clinical practice, the use of prefilled syringes has been promoted; however, this situation presents users with the problem of sliding friction between the polypropylene syringe barrel and the IIR gasket attached to the plunger. In order to solve this problem, researchers have been examining two solutions: (1) using a lubricant to reduce friction or (2) affixing fluoropolymer to IIR with an adhesive. However, there is a concern that the lubricant and/or adhesive might mix in a drug. That's why a technique for reducing sliding friction of IIR by neither using a lubricant nor affixing the fluoropolymer film to IIR with an adhesive has been sought.

Polytetrafluoroethylene (PTFE), known by the trade name of Teflon®, has the highest water-repellent and oil-repellent properties of all types of fluorine-containing resins. However, it is, therefore, very hard to make it stick to other materials. This group found that if PTFE was pretreated by atmospheric-pressure plasma treatment, the adhesion strength between PTFE and IIR was greatly improved with merely the application of thermal compression. In T-peel tests, the PTFE/IIR interface did not fall away and the adhesion strength strong enough to cause cohesive failure of the rubber was achieved. Furthermore, in thermal compression a month after the plasma treatment, the adhesion strength was found to be about the same.

This group's technique will be sought after as a technology for covering IIR with PTFE without the use of an adhesive in order to reduce the sliding friction of a rubber gasket in a syringe.

This research achievement will be reported on at the 5th World Congress on Adhesion and Related Phenomena at the Nara Prefectural New Public Hall on September 9, 2014, Innovation Japan 2014 University Fair at the Tokyo Big Sight on September 11, 2014, and the 130th Symposium of The Surface Finishing Society of Japan at Kyoto University on September 22, 2014. 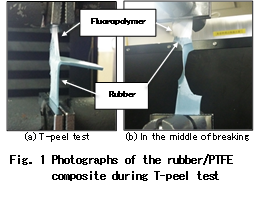 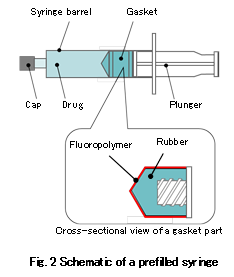