Language functions are influenced by environment and genetic makeup. Advances in genetic analyses have uncovered several genes associated with language development and abilities. Several cortical regions are involved in processing language function. Event-related desynchronizations (ERDs) are attenuations  of brain activities in specific frequency band and have been associated with language processing. However, little is known about how genetic and environmental factors affect language-related ERDs. Furthermore, it is not clear how language-related ERDs differ among individuals and how they affect verbal ability.

In a new study, Masayuki Hirata, Toshihiko Araki and their group members at Osaka University used magnetoencephalography (MEG) to measure the brain activity of monozygotic (100% genetic similarity) and dizygotic (50% genetic similarity) elderly Japanese twins. Brain activity was measured while the participants silently read a series of words and generate a verb associated with them. The ERDs in the 25-50 Hz frequency band called low gamma ERDs had the highest power in the left frontal area of the brain. This brain region is important for language function.

The study authors compared the power of low gamma ERDs in the left frontal area of monozygotic and dizygotic twins using a quantitative genetic analysis called structural equation modelling. These analyses showed that the power of ERDs is equally affected by genetic and environmental factors. Interestingly, the genetic control of ERDs in the left frontal area was preserved even after the siblings had been living apart, in different environments, for many years. This suggests that genetic factors strongly affected the power of language-specific ERDs.

To determine how language-related ERDs affect verbal ability, the researchers examined correlations between the ERD powers and verbal test scores. Individuals with higher test scores had lower-power ERDs in the left frontal area, showing that verbal memory is associated with language-related ERDs. Verbal memory often deteriorates in elderly individuals. The authors suggest that the verbal task in this study placed a higher demand on the elderly participants, thereby increasing the power of low gamma ERDs.

The findings provide novel insights into how genes and the environment shape the development of verbal ability.

Twin studies have suggested that there are genetic influences on inter-individual variation in terms of verbal abilities, and candidate genes have been identified by genome-wide association studies. However, the brain activities under genetic influence during linguistic processing remain unclear. In this study, we investigated neuromagnetic activities during a language task in a group of 28 monozygotic (MZ) and 12 dizygotic (DZ) adult twin pairs. We examined the spatio-temporal distribution of the event-related desynchronizations (ERDs) in the low gamma band (25–50 Hz) using beamformer analyses and time–frequency analyses. Heritability was evaluated by comparing the respective MZ and DZ correlations. The genetic and environmental contributions were then estimated by structural equation modeling (SEM). We found that the peaks of the low gamma ERDs were localized to the left frontal area. The power of low gamma ERDs in this area exhibited higher similarity between MZ twins than that between DZ twins. SEM estimated the genetic contribution as approximately 50%. In addition, these powers were negatively correlated with the behavioral verbal scores. These results improve our understanding of how genetic and environmental factors influence cerebral activities during linguistic processes. 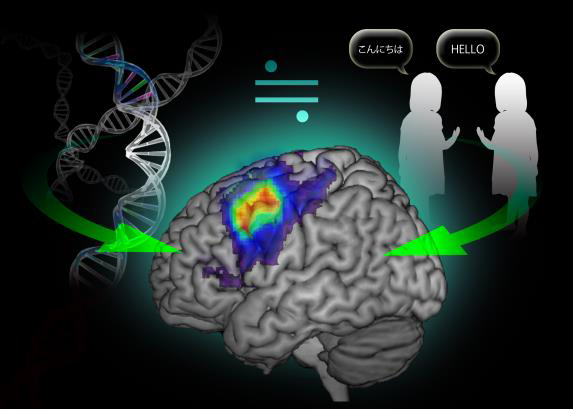 To learn more about this research, please view the full research report entitled “ Language-related cerebral oscillatory changes are influenced equally by genetic and environmental factors ” at this page of the NeuroImage website.