New analysis method for schizophrenia based on network theory

Researchers from the National Institute of Information and Communications Technology (NICT) and Osaka University have developed a method for estimating modular brain areas characteristic of schizophrenia and distinguishing them from the areas in healthy people through the use of brain image data measured in a resting state.

Background
In recent years, the development of high-precision measurement technology for brain research has led to increasing interest in using functional magnetic resonance imaging (fMRI) with high spatial resolution for the diagnosis of mental illnesses.
Schizophrenia is a mental disorder that develops in about 1 of 100 people, and its diagnosis is usually made by a doctor based on a set of symptoms, but an objective method for diagnosis has not yet been established. In the past, fMRI data analysis of brain activity has mainly focused on estimating the areas in the brain mostly involved in memorization. However, recent research has suggested a link between the functional expression and onset of disease on one hand and interactions between multiple brain regions on the other hand.
Network theory is a promising candidate to analyze interactions over the whole brain, as opposed to only parts of the brain. Through the analysis of schizophrenia data, it was found that tightly interconnected parts of a network called "modules" form an effective basis for network theory.

Results
The research group has developed a new method for module analysis that divides all subject data according to modules (indicated by colors in the figure) all at once without having to rely on averaging. The previous method to analyze fMRI data for resting brain activity of schizophrenia patients required the data of each patient individually to be analyzed and divided into modules. This required the combination of the per-patient modules into an aggregated module - a method that suffers from inconsistencies.
By using this technique, it became possible to estimate the characteristic brain regions modules of schizophrenic patients and distinguish with healthy subjects, with less variation in the results. This result is especially of interest in psychiatry, because it allows an objective diagnosis based on brain imaging data only, without a subjective opinion about a patient being required.
Additionally, in future, it will be possible to develop an automatic diagnosis system to complement the diagnosis of a doctor, which will be very useful in the medical field. 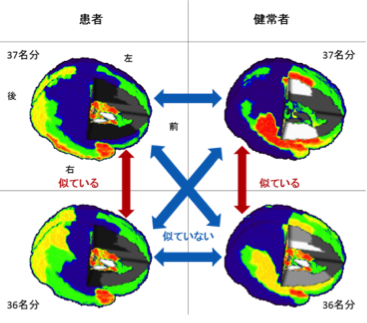