A team of researchers led by Osaka University finds that mutant variants of the calcium channel protein RyR1 are hypersensitive to heat, which creates a positive feedback loop of calcium release and leads to malignant hyperthermia

Hot summer temperatures may have you reaching for a fan and an iced drink in your quest to keep cool. But now, researchers from Japan have found that some mutant proteins are even less tolerant of the heat, getting trapped in a cycle of activation that can have deadly consequences.

In a study soon to be published in Proceedings of the National Academy of Sciences, a team of researchers led by Osaka University reveals that malignant hyperthermia (MH) is caused by heat-hypersensitive mutant calcium channel proteins.

“Most human MH-associated mutations have been identified in the ryanodine receptor type 1 (RyR1) gene and cause increased calcium release from the sarcoplasmic reticulum, leading to hyperthermia,” explains Kotaro Oyama, one of the lead authors on the study. “Some studies have suggested that there is a positive feedback loop between calcium release and thermogenesis, but it was still unclear how this loop might work.”

To investigate this, the researchers precisely heated cultured cells expressing mutant RyR1 proteins with an infrared laser beam and assessed changes in calcium flow using fluorescence calcium imaging. This approach enabled them to quantitatively evaluate the cellular response to heat.

“The results were very clear,” says Madoka Suzuki, senior author on the study. “A local heat pulse induced an intracellular calcium burst, but even a weak heat pulse induced this response in cells expressing mutant forms of the RyR1 channels, demonstrating their hypersensitivity to heat compared with the unmutated channel.” The team named this novel response “Heat-Induced Ca2+ Release (HICR).” The HICR was also observed in skeletal muscles isolated from a mouse model of MH.

Importantly, the calcium that is released into the intracellular environment in response to heat via the HICR mechanism could possibly accelerate further thermogenesis in the cell, creating a cascade effect.

“Our findings suggest that, when calcium leakage through RyR1 mutant channels is enhanced by MH inducers such as anesthetics, a positive feedback loop is created that leads to the release of more and more calcium. One plausible explanation for the calcium leakage is that the mutant proteins are easily destabilized by heat,” states lead author Kotaro Oyama.

Given that recent studies suggest that there is a close relationship between malignant hyperthermia and heat stroke, the findings from this study could also provide insight into how exertional heat stroke occurs under extreme environmental conditions. A better understanding of this condition could help develop preventive and treatment strategies. 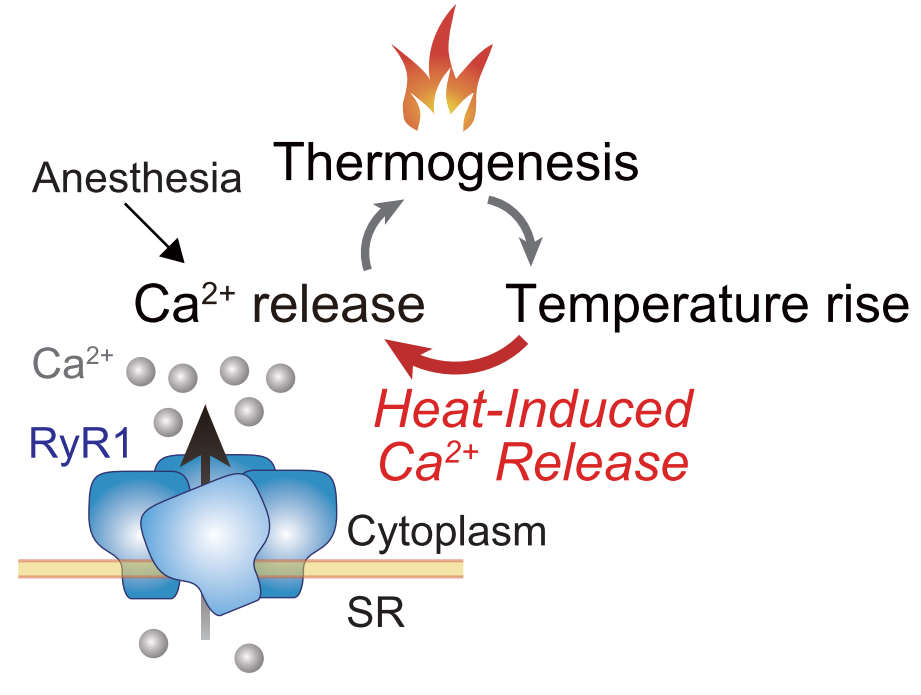 Usage Restriction： Credit must be given to the creator. 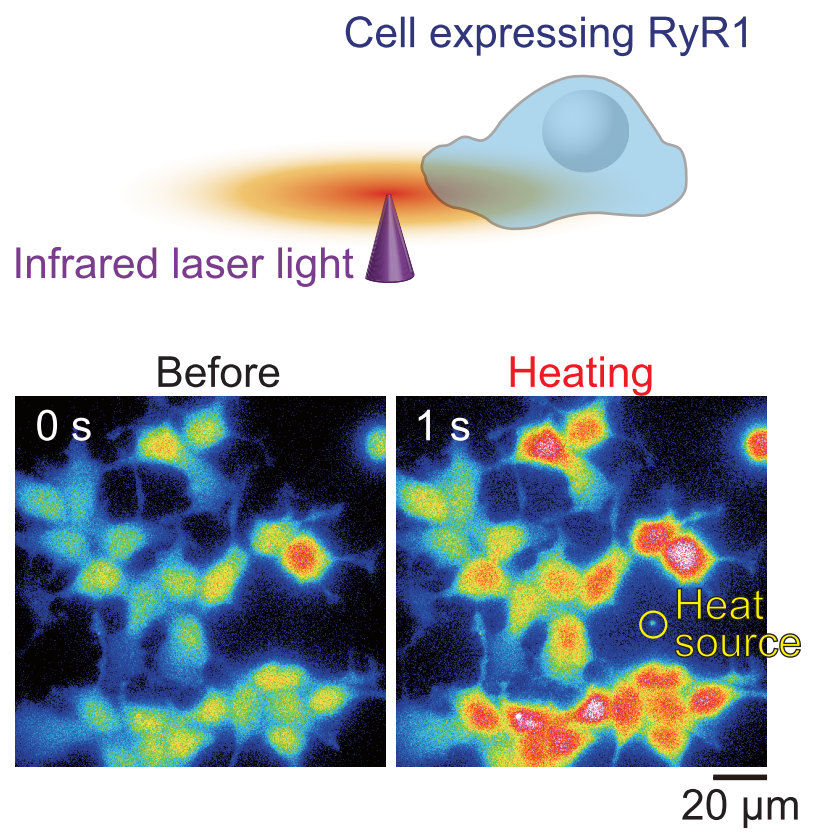 Fig. 2 Top, a 1455-nm infrared laser light was focused using an objective lens to apply heat to cells under a fluorescence microscope. The cells expressed RyR1 with mutations that are known to be related to malignant hyperthermia. Bottom, Ca2+ fluorescence imaging showed that intracellular Ca2+ levels increased within one second after heating began. The images are shown in a pseudo-color, with red indicating areas where the Ca2+ concentration was higher than the yellow or blue areas.

The article, “Heat-hypersensitive mutants of ryanodine receptor type 1 revealed by microscopic heating,” was published in Proceedings of the National Academy of Sciences, U.S.A. at DOI: https://doi.org/10.1073/pnas.2201286119.