A step toward the efficient production of useful substances using microorganisms

A group of researchers led by Professor SHIMIZU Hiroshi and Professor TOYA Yoshihiro from the Graduate School of Information Science and Technology of Osaka University developed a technique to control the central metabolic flux of Escherichia coli ( E. coli ) by light illumination, a world first.

Various useful chemical compounds, including alcohol fuels and biodegradable plastics, are produced by using industrial microbes such as E. coli . During their production process, the material glucose is converted to a target compound via a metabolic pathway, or a linked series of chemical reactions occurring within a cell. Because there are several branch points in the metabolic pathway, it is necessary to optimize the metabolic flux ratio at each branch point in order to enhance the conversion rate from a material to a target compound.

Conventionally, the branching ratio of metabolic flux between Embden-Meyerhof-Parnas (EMP), the most common type used for breakdown of glucose, and Oxidative Pentose Phosphate (oxPP) pathways was controlled by inducing gene expression of glucose-6-phosphate isomerase (pgi). Pgi, a key enzyme in glycolysis, functions at the juncture of gluconeogenesis through the addition of drugs to cell culture. However, since it was impossible to remove the chemical inducer from the medium, one was not able to control the central metabolic flux by repeating an on/off metabolic switch to regulate flux distribution.

Thus, using a mechanism for controlling gene expression by light, a mechanism possessed by photosynthetic microorganisms, the researchers tried to develop a new method for regulating cellular metabolism via light illumination, which can be freely turned on or off. They introduced a molecular device, or an optogenetic switch, to E.coli , industrial microorganisms which do not have the molecular mechanism of light-dependent control of gene expression.

In this study, the researchers constructed a light-induced metabolic switch using proteins from blue-green algae cyanobacteria : CcaS, the light sensor, and CcaR, the response regulator, to regulate expression of enzyme pgi at the branch point in the central metabolic flux of E.coli cells by light illumination. These proteins induce pgi expression by placing pgi downstream to the promoter under green light and suppress pgi expression under red light.

The central metabolism of cells is important in growth of living things and production of useful substances. In the fields of bioengineering and medical treatment, a technique to quickly control the metabolic flux is required for understanding and using metabolic mechanisms. Control via a light-inducible switch to regulate glycolytic fluxes will become a useful tool for optimizing metabolic flux in cells and establishing a process for producing highly efficient useful substances. 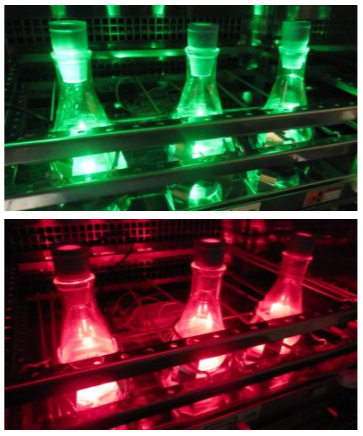 The article, "Optogenetic Switch for Controlling the Central Metabolic Flux of Escherichia coli" was published in Metabolic Engineering at DOI: https://doi.org/ 10.1016/j.ymben.2019.06.002 .