It was generally thought that cytokines, such as adiponectin, modulated cells through signals transmitted from cytokine receptors and it was unknown how adiponectin accumulated in cells and modulated cellular functions.

This group identified adiponectin as adipocytokine secreted from adipose cells in large quantity and reported that decreased adiponectin in blood associated with visceral fat played a critical role in developing obesity, which presents pathological conditions such as cardiovascular disorder. This group also demonstrated in their studies using T-cadherin KO mice that adiponectin provided T-cadherin–mediated organ protection.

In addition, it was known that adiponectin binds to T-cadherin and that Single Nucleotide Polymorphism (SNP) in the human T-cadherin gene is related to both the level of adiponectin in the blood as well as to a risk for coronary artery disorder. Because exosomes contribute to the maintenance of cellular homeostasis and protection by excreting and eliminating wastes in cells, it is thought that adiponectin is involved in the maintenance of cellular homeostasis.

Furthermore, this group found that adiponectin reduced ceramides in the cultured endothelial cells by promoting exosome release, thereby reduced cardiovascular ceramide accumulation. It is thought that excessive accumulation of harmful materials such as ceramides in cells cause vascular disorder and/or diabetes. When people have diabetes, they develop various damage in their organs. Given the benefits of exosomal efflux by adiponectin, it is expected that adiponectin will be applied to anti-aging and treatment and prevention of cardiovascular diseases by mimicking or strengthening the mechanism behind adiponectin’s organ protection effects.

Adiponectin, an adipocyte-derived circulating protein, accumulates in vasculature, heart, and skeletal muscles through interaction with a unique glycosylphosphatidylinositol-anchored cadherin, T-cadherin. Recent studies have demonstrated that such accumulation is essential for adiponectin-mediated cardiovascular protection. Here, we demonstrate that the adiponectin/T-cadherin system enhances exosome biogenesis and secretion, leading to the decrease of cellular ceramides. Adiponectin accumulated inside multivesicular bodies, the site of exosome generation, in cultured cells and in vivo aorta, and also in exosomes in conditioned media and in blood, together with T-cadherin. The systemic level of exosomes in blood was significantly affected by adiponectin or T-cadherin in vivo. Adiponectin increased exosome biogenesis from the cells, dependently on T-cadherin, but not on AdipoR1 or AdipoR2. Such enhancement of exosome release accompanied the reduction of cellular ceramides through ceramide efflux in exosomes. Consistently, the ceramide reduction by adiponectin was found in aortas of WT mice treated with angiotensin II, but not in T-cadherin–knockout mice. Our findings provide insights into adiponectin/T-cadherin–mediated organ protection through exosome biogenesis and secretion. 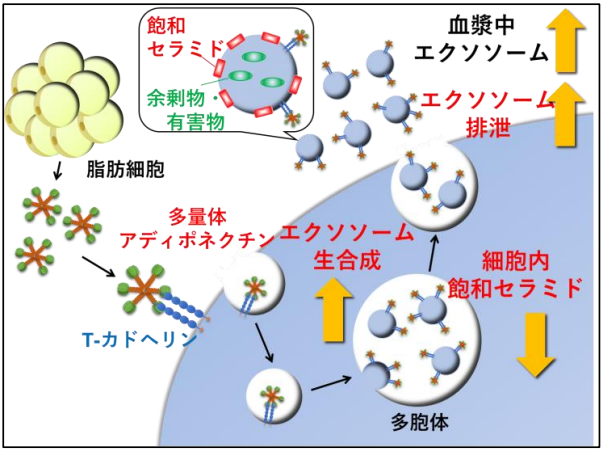