The Cardiovascular Surgery Group at Osaka University performed a transcatheter mitral valve implantation in dysfunctional artificial valves in severe cardiac failure patients with prosthetic valve dysfunction, which was previously thought to be incurable or high-risk, succeeding in improving the cardiac function of these patients. In the future, this technique is anticipated as a new therapy for the treatment of prosthetic valve dysfunction in patients with serious heart failure who are either inoperable or require a post-surgery auxiliary artificial heart.

Led by Professor Yoshiki SAWA, the Cardiovascular Group in the Graduate School of Medicine, Osaka University, has developed a wide variety of treatment for severe heart failure, such as skeletal myoblast cell sheet transplantation. This group has performed over 500 transcatheter valve replacement surgeries, a technique that is gathering attention as minimally invasive heart surgery, establishing Osaka University Hospital’s role as one of Japan’s leading medical institutes.

Cardiac surgery in patients with severe heart failure has been thought to entail a significant risk due to surgical stress. The risk of reoperation is especially high when a prosthetic valve becomes dysfunctional. Also, surgical stress may further deteriorate cardiac function in patients waiting for heart transplants, increasing their need for an auxiliary artificial heart.

This time, Prof. Sawa’s group succeeded in transcatheter mitral valve implantation in patients with severe heart failure in clinical research for transcatheter aortic valve implantation (TAVI), a new therapeutic method which the group had actively performed. Because this therapeutic method has enabled minimally invasive treatment on patients who were previously regarded as being incurable or high-risk, it is highly anticipated as a new treatment method for prosthetic valve dysfunction in patients with severe heart failure. 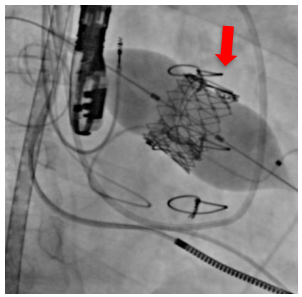