Blood vessels are not designed to fight infection

Most infections enter the body through organs that are in constant contact with the outside environment, such as the lungs and intestines. Accordingly, the epithelial cells lining these organs have developed an immune system that removes the infection by using intracellular machinery known as xenophagy.

"Xenophagy is a type of autophagy that acts on foreign invasions. Autophagy is a method through which a cell destroys unneeded or defective material," explained Osaka University Professor Tamotsu Yoshimori.

While these organs are well prepared to combat an invasion, should an infection enter the vascular system, it risks beings transmitted throughout the body via blood. Yoshimori therefore wondered if endothelial cells lining blood vessels are as equipped with xenophagy machinery as epithelial cells. In a new published study, his team of researchers discovered that they are not.

"We found that Group A Steptocococcus (GAS) can survive and multiply in endothelial cells, but epithelial cells remove GAS infection via xenophagy. The reason for the difference is insufficient ubiquitination of the invading GAS," he said.

"If we coated the GAS with ubiquitin before infecting the cell, we found xenophagy worked in endothelial cells comparably to epithelial cells," said Dr. Tsuyoshi Kawabata, a member of the lab who managed the project.

"If ubiquitin could activate xenophagy, then we know that the cell has all the equipment it needs. The challenge is to identify what molecular targets can activate the system. This information could be used for drug discovery."

"The problem with nitric oxide is that it is a vasodilator. There is an evolutionary reason that the vascular system does not produce too much nitric oxide because it risks severely low blood pressure."

Instead, Kawabata believes that attention should be given to other molecular pathways that regulate the ubiquitination. While the study pointed to nitric oxide signaling, it also found evidence that nitric-oxide independent factors could regulate the recruitment of ubiquitin to execute xenophagy on GAS.

"We believe there is a nitric oxide-independent pathway that regulates ubiquitination. This pathway could make a promising drug target for a novel approach to fighting GAS," he said.

Group A Streptococcus (GAS) is deleterious pathogenic bacteria whose interaction with blood vessels leads to life-threatening bacteremia. Although xenophagy, a special form of autophagy, eliminates invading GAS in epithelial cells, we found that GAS could survive and multiply in endothelial cells. Endothelial cells were competent in starvation-induced autophagy, but failed to form double-membrane structures surrounding GAS, an essential step in xenophagy. This deficiency stemmed from reduced recruitment of ubiquitin and several core autophagy proteins in endothelial cells, as demonstrated by the fact that it could be rescued by exogenous coating of GAS with ubiquitin. The defect was associated with reduced NO-mediated ubiquitin signaling. Therefore, we propose that the lack of efficient clearance of GAS in endothelial cells is caused by their intrinsic inability to target GAS with ubiquitin to promote autophagosome biogenesis for xenophagy. 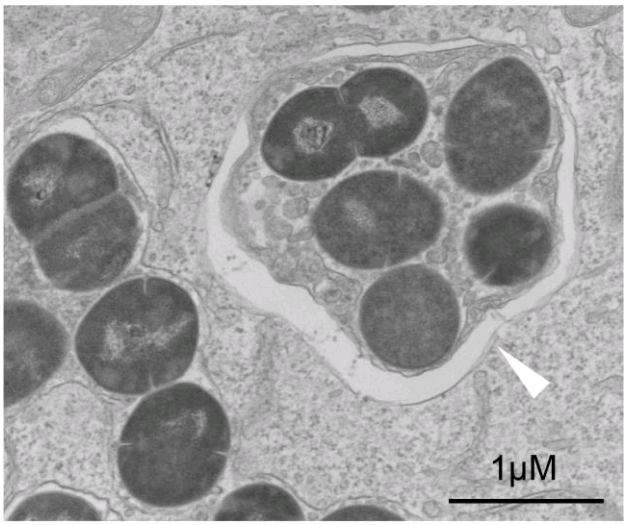 This is an electron microscopy image of GAS engulfed by autophagosome. Artificial coating of GAS with ubiquitin enables endothelial cells to facilitate autophagosome membrane formation surrounding GAS (a white arrowhead).

To learn more about this research, please view the full research report entitled " Endothelial cells are intrinsically defective in xenophagy of Streptococcus pyogenes " at this page of the PLOS Pathogens website.