Sustainable Amine Production through Hydrogenation of Amides under Mild Conditions

Amines are vital in nature; for example, amino acids—the building blocks of proteins and thus fundamental to life—are amines. Numerous materials including pharmaceuticals, dyes, polymers, and solvents are amines. Thus, amines are important targets in chemical synthesis. The formation of amines from amides is of great interest. There are numerous amides that are widely available and inexpensive, making them attractive substrates for conversion to amines. However, amides are very stable, which makes their conversion to amines difficult. Typical approaches to convert amides to amines require metal reagents, which generate metal waste, or have poor efficiency.

Direct formation of amines from amides through hydrogenation is desirable because water should be the only by-product. However, harsh conditions are required for this conversion. The development of catalysts that allow the amide hydrogenation reaction to be performed under mild conditions is a goal of numerous chemists because it is important for sustainable pharmaceutical production.

Osaka University researchers have recently developed a new catalyst for amide hydrogenation that operates under mild conditions. This catalyst has numerous favorable features, including the ability to be isolated and reused, high selectivity, and most importantly, it catalyzes amide conversion to amines at just 70 °C and a hydrogen pressure of 30 bar. The catalyst was also able to effectively promote amine formation at room temperature or a hydrogen pressure of 1 bar, representing the first example of amide hydrogen at ambient pressure or temperature. The team then investigated the substrate scope and recyclability of the catalyst. The catalyst was able to convert various amides to target amines in high yield and displayed no loss of activity after being recycled ten times.

“We initially surveyed the activity of various bimetallic nanoparticle catalysts in amide hydrogenation,” says first author Takato Mitsudome. “Our results revealed that the combination of platinum and vanadium is a key role for amine production under mild conditions.”

“This is the first catalyst to allow green production of amines from amides under easily achievable conditions,” says team leader Kiyotomi Kaneda.

This catalyst effective for sustainable amide hydrogenation under mild conditions will facilitate access to amines, which are important materials used in applications ranging from drugs to electronics. 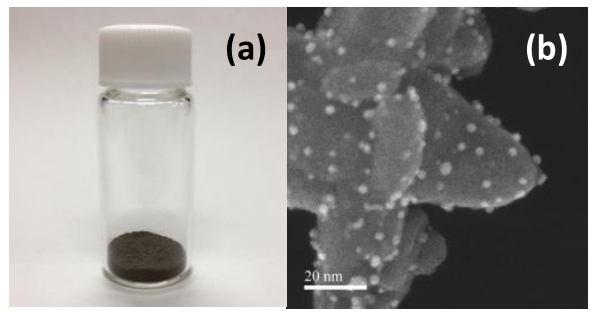 To learn more about this research, please view the full research report entitled " Mild Hydrogenation of Amides to Amines over Platinum-Vanadium Bimetallic Catalysth " at this page of the Angewandte Chemie website.