Safe and inexpensive hydrogen production as a future energy source

Hydrogen gas is a promising alternative energy source to overcome our reliance on carbon-based fuels, and has the benefit of producing only water when it is reacted with oxygen. However, hydrogen is highly reactive and flammable, so it requires careful handling and storage. Typical hydrogen storage materials are limited by factors like water sensitivity, risk of explosion, difficulty of control of hydrogen-generation. Hydrogen gas can be produced efficiently from organosilanes, some of which are suitably air-stable, non-toxic, and cheap. Catalysts that can efficiently produce hydrogen from organosilanes are therefore desired with the ultimate goal of realizing safe, inexpensive hydrogen production in high yield. Ideally, the catalyst should also operate at room temperature under aerobic conditions without the need for additional energy input.

Generation of hydrogen from inexpensive organosilane substrates under ambient conditions without additional energy input represents an exciting advance towards the goal of using hydrogen as a green energy source. 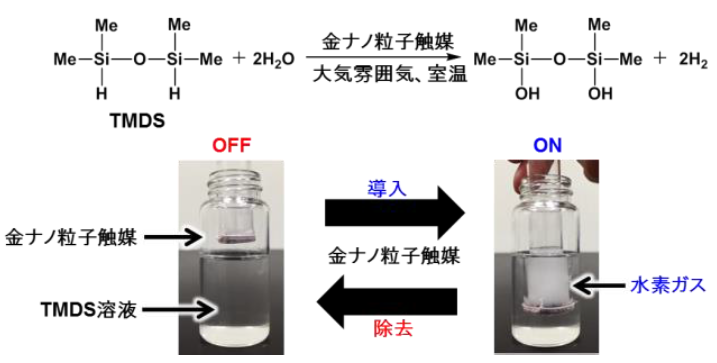 To learn more about this research, please view the full research report entitled “ On-demand Hydrogen Production from Organosilanes at Ambient Temperature Using Heterogeneous Gold Catalysts ” at this page of the Scientific Reports website.