Will be helpful in detecting dental caries and systemic illness

Accumulation of Advanced Glycation End Products (AGEs) in tissues is observed in patients with cardiovascular diseases such as tissue aging and diabetes, and its research is being conducted in various medical fields. It was said that AGE existed in dental caries as well, but the details were unknown.

The group led by Prof. Miura has made it possible to observe distribution of AGEs in dental caries in the order of nanometers by applying immune electron microscopy, which is used for observing antibody response with an electronic microscope. Furthermore, by using a quantitative evaluation method in which collagen fibers in dentine are broken down by acid without decalcification, this group has made it possible to stably analyze AGEs.

On the other hand, a group led by Prof. Araki, by applying nanosecond fluorescence lifetime imaging, discovered that fluorescence life of collagen shortened because of crosslinked AGEs. Using this principle, this group has enabled the visualization of glycation and detection of dental caries at high accuracy. Through a merger of the fields of dentistry and engineering, the relationship between glycation and dental caries was clarified for the first time.

In this study, it was confirmed that glycation progressed due to dental caries and AGEs accumulated through an immunohistochemistrical method and an optical method using fluorescence lifetime as an index. Furthermore, this joint group found that AGE accumulation in dentine due to aging increased acid and enzymatic resistance, suppressing the progression of dental caries. Additionally, it was also found that it was possible to specifically sort out the areas of dental caries by using fluorescence properties of specific AGEs. As a result, this group found that AGEs accumulated more in carious dentin than in sound dentin.

The elderly were more likely to have chronic dental caries with progress slower than those found in young people. This was thought to be because of AGEs; however, this group clarified that it was because of increased tolerance against acid and enzyme in dentin matrix due to accumulation of AGEs, indicating that this was one of the reasons of their chronic situation.

These findings will greatly contribute to the elucidation of the mechanism of chronic dental caries related to AGEs as well as the development of new methods for detecting dental caries and treatment.

Advanced glycation end-products (AGEs) are generated via nonenzymatic glycation of dentinal collagen, resulting in accumulation of AGEs in dentin tissue. Since accumulated AGEs cause crosslinking between amino acid polypeptides in the collagen molecule and modify mechanical properties of dentinal collagen, the authors assumed that there would be a significant interaction between the generation of AGEs and progression of caries in dentin. To confirm such an interaction, spectroscopic imaging analyses (i.e., nanosecond fluorescence lifetime imaging and second harmonic generation light imaging) were performed in addition to biochemical and electron microscopic analyses in the present study. Seven carious human teeth were fixed in paraformaldehyde and cut longitudinally into 1-mm sections using a low-speed diamond saw for the following analyses. In transmission electron microscopy (TEM) analysis, nondecalcified specimens were embedded in epoxy resin and sliced into thin sections for observation. For the immunohistochemical analysis, the specimens were paraffin embedded after decalcification for 2 wk and sectioned with a microtome. Resultant sections were stained with anti-AGE and anticollagen antibodies. The demineralized specimens were used for spectroscopic analyses without additional treatment. For Western blotting analysis, specimens were separated into carious and sound dentin. Each specimen was homogenized with a bead crusher and an ultrasonic homogenizer and then treated with hydrochloric acid. In carious dentin, the collagen fibers showed an amorphous structure in the TEM image, and the AGEs were localized in the areas of bacterial invasion in the immunostaining image. The total amount of AGEs in carious dentin was higher than in sound dentin in Western blotting. The ultrastructure of type I collagen and total amount of AGEs varied markedly in the dentinal caries region. The fluorescence lifetime was shorter in the carious area than that in the sound areas, indicating an increase of AGEs in the carious area. The increase of AGEs could influence the progression of dentinal caries. 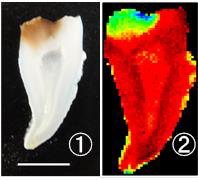 To learn more about this research, please view the full research report entitled “Influence of non-enzymatic glycation in dentinal collagen on dental caries” at this page of the Journal of Dental Research website.