It had been thought impossible to know the true oxidized structures of metalloproteins because the center of the metal was oxidized so quickly due to damages by X-ray radiation, which is necessary for elucidating structures, inducing a structural change. However, in recent years, thanks to Serial Femtosecond Crystallography (SFX), a new technique using XFEL, it is becoming possible to clarify the state at ambient temperatures without radiation damage.

Using extremely short optical pulses of 10 femtoseconds or less from SACLA, it is possible to get structural information before the structural change is induced by radiation damage. With improved experimental techniques, this group verified a method for determining absolute configuration by the single-wavelength anomalous diffraction (SAD) method using SFX and copper atoms for the first time, succeeding in obtaining accurate three-dimensional structures of copper-containing nitrite reductase.

Using SACLA technology and Spring-8 technology in combination, this group succeeded in obtaining new knowledge about proton-coupled electron transfer, which is an important biochemical reaction process common in many enzymes supporting life phenomena, from information about true oxidized structures of metalloproteins.

The understanding of the new biochemical reaction process clarified by this group’s research is a finding which will connect the fields of material science, bioscience, and earth science and become a foundation of the development of fields controlling nitrogen cycling on Earth. 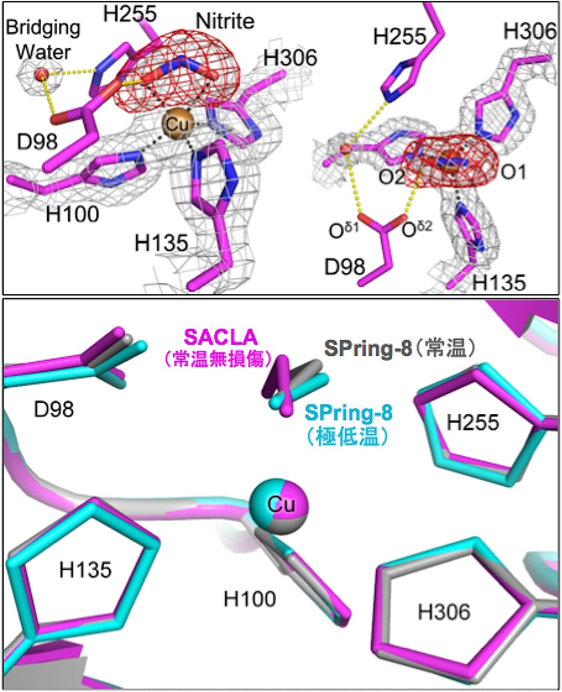 Electron-density maps around catalytic Cu center of nitrite reductase
in complex with nitrite determined at SACLA (upper) and which was superposed with structures solved at SPring-8 (lower).

Proton-coupled electron transfer (PCET), a ubiquitous phenomenon in biological systems, plays an essential role in copper nitrite reductase (CuNiR), the key metalloenzyme in microbial denitrification of the global nitrogen cycle. Analyses of the nitrite reduction mechanism in CuNiR with conventional synchrotron radiation crystallography (SRX) have been faced with difficulties, because X-ray photoreduction changes the native structures of metal centers and the enzyme–substrate complex. Using serial femtosecond crystallography (SFX), we determined the intact structures of CuNiR in the resting state and the nitrite complex (NC) state at 2.03- and 1.60-Å resolution, respectively. Furthermore, the SRX NC structure representing a transient state in the catalytic cycle was determined at1.30-Å resolution. Comparison between SRX and SFX structures revealed that photoreduction changes the coordination manner of the substrate and that catalytically important His255 can switch hydrogen bond partners between the backbone carbonyl oxygen of nearby Glu279 and the side-chain hydroxyl group of Thr280.These findings, which SRX has failed to uncover, propose a redox coupled proton switch for PCET. This concept can explain how proton transfer to the substrate is involved in intramolecular electron transfer and why substrate binding accelerates PCET. Our study demonstrates the potential of SFX as a powerful tool to study redox processes in metalloenzymes.

Significance
Copper nitrite reductase (CuNiR) is involved in denitrification of the nitrogen cycle. Synchrotron X-rays rapidly reduce copper sites and decompose the substrate complex structure, which has made crystallographic studies of CuNiR difficult. Using femtosecond X-ray free electron lasers, we determined intact structures of CuNiR with and without nitrite. Based on the obtained structures, we proposed a redox-coupled proton switch model, which provides a new explanation for proton-coupled electron transfer (PCET) in CuNiR. PCET is widely distributed through biogenic processes including respiratory and photosynthetic systems and is highly expected to be incorporated into bioinspired molecular devices. Our study also establishes the foundation for future studies on PCET in other systems.

To learn more about this research, please view the full research report entitled " Redox-coupled proton transfer mechanism in nitrite reductase revealed by femtosecond crystallography " at this page of the Proceedings of the National Academy of Sciences of the United States of America website.