In condensed matter physics, exploration of a novel quantum liquid state, such as Bose-Einstein condensation of cold atoms, superconductivity and quantum Hall state of electron systems, has been a subject of intense research both experimentally and theoretically. While many candidates of “quantum spin liquid” in which spin degrees of freedom does not freeze even at very low temperatures have been reported, almost no example has been found for an orbital liquid state, where the orbital degree of freedom remain fluctuating without lattice deformation down to a very low temperature. In the copper oxide 6H-Ba 3 CuSb 2 O 9 with a perovskite structure, it was pointed out by theory that a “quantum spin-orbital liquid state” where spin and orbital are entangled to form a quantum liquid state would exist, but it was difficult to confirm such an orbital state because no single crystal has been available.
In the present study, we have established the preparation method for a large single crystal of 6H-Ba 3 CuSb 2 O 9 at ISSP, Univ. of Tokyo, which allows the full investigation of the ground state by various methods. Our current paper published in PNAS reports the first observation of a striking absence of the static Jahn-Teller distortion down to the lowest temperature in an oxide based on copper (II), which is known as a strong Jahn-Teller active ion, from the combined study including X-ray diffraction at the synchrotron radiation facility Spring-8 by a Nagoya University team, electron spin resonance (ESR) at Osaka University, ultrasound measurements at Iwate University, and Raman spectroscopy at Johns Hopkins University. The aforementioned results pave the way to realize a new quantum liquid state named “quantum spin-orbital liquid.” Moreover, we have succeeded in finding the structural conditions to suppress the Jahn-Teller distortion. These results provide a roadmap in material design to realize a quantum spin-orbital-liquid state, and affect material research required for the control of quantum information in a quantum computer.

With decreasing temperature, liquids generally freeze into a solid state, losing entropy in the process. However, exceptions to this trend exist, such as quantum liquids, which may remain unfrozen down to absolute zero owing to strong quantum entanglement effects that stabilize a disordered state with zero entropy. Examples of such liquids include Bose−Einstein condensation of cold atoms, superconductivity, quantum Hall state of electron systems, and quantum spin liquid state in the frustrated magnets. Moreover, recent studies have clarified the possibility of another exotic quantum liquid state based on the spin–orbital entanglement in FeSc 2 S 4 . To confirm this exotic ground state, experiments based on single-crystalline samples are essential. However, no such single-crystal study has been reported to date. Here, we report, to our knowledge, the first single-crystal study on the spin–orbital liquid candidate, 6H-Ba 3 CuSb 2 O 9 , and we have confirmed the absence of an orbital frozen state. In strongly correlated electron systems, orbital ordering usually appears at high temperatures in a process accompanied by a lattice deformation, called a static Jahn−Teller distortion. By combining synchrotron X-ray diffraction, electron spin resonance, Raman spectroscopy, and ultrasound measurements, we find that the static Jahn−Teller distortion is absent in the present material, which indicates that orbital ordering is suppressed down to the lowest temperatures measured. We discuss how such an unusual feature is realized with the help of spin degree of freedom, leading to a spin–orbital entangled quantum liquid state. 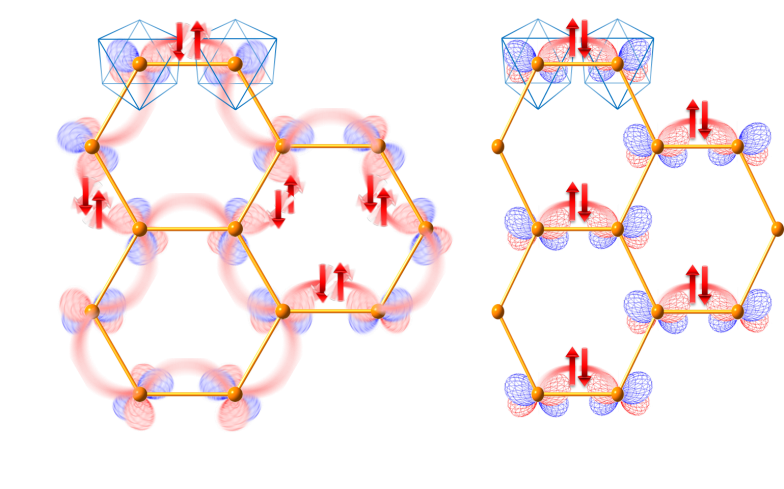 Fig. 1.  Schematic pictures of (Left) spin-orbital liquid state (Right) valence bond solid state. In the present copper oxide with a perovskite structure, a spin-orbital entangled short-range-ordered state is expected on a honeycomb Cu(II) lattice. A pair of up and down arrows indicates a singlet dimer state based on the neighboring Cu 2+ spins. A snap shot of this short range ordered state is depicted in the left panel. By breaking the structural condition to suppress the Jahn-Teller distortion, it is possible to realize the valence bond solid state in the crystal with a lattice distortion as shown in the right panel. 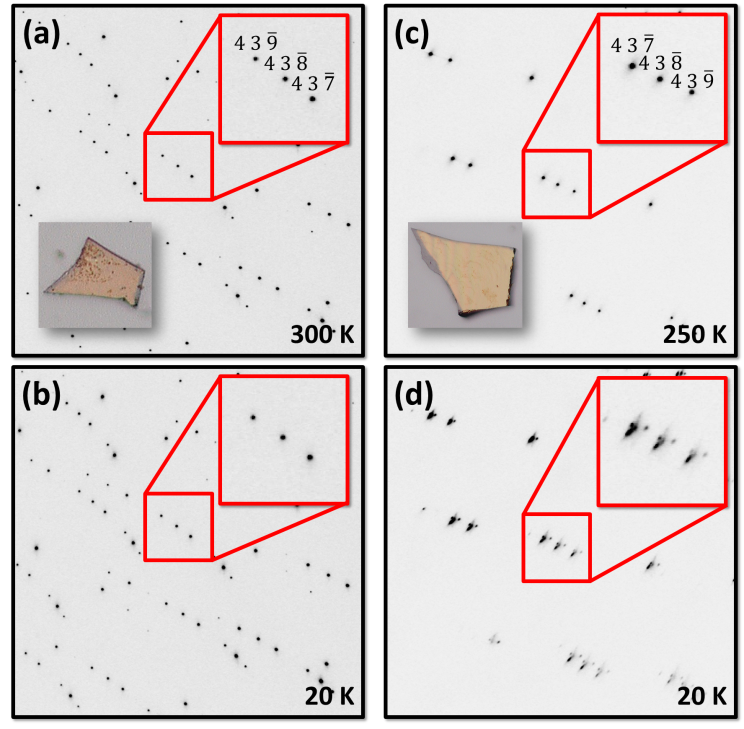 Fig. 2 Single-crystal X-ray diffraction profiles for (a)(b) the sample which realizes a spin-orbital liquid state and (c)(d) the sample which indicates a valence bond solid state.  In (a)(b), no change of the diffraction pattern was detected down to low temperatures, indicating clearly that the Jahn-Teller distortion, which freezes orbital degree of freedom, does not occur.  In contrast, the diffraction pattern at low temperatures (d) shows splitting of the peaks, indicating the occurrence of the Jahn-Teller distortion.

To learn more about this research, please view the full research report entitled " Absence of Jahn-Teller transition in the hexagonal Ba3CuSb2O9 single crystal " at this page of the Proceedings of the National Academy of Sciences website.