Important step in the realization of alternative energy sources

Makes use of self-assembly, synthesis techniques

Two researchers at the Graduate School of Science, Osaka University succeeded in the synthesis of a new material, a one-dimensional dimer, by making use of self-assembly, synthesis techniques which, in turn, were much easier than traditional methods.

These researchers also found that when a one-dimensional space was used for hydrogen storage, the storage capacity of this material became the largest among existing Metal-Organic Frameworks (MOFs) at ambient conditions.

In the face of ever-increasing serious energy and environmental problems and in order to obtain a new source of alternative energy to that of oil, the achievement of hydrogen-based society is sought after. To this end, a technology for storing and releasing hydrogen as energy carrier is needed. For example, hydrogen turns into water through burning; however, existing hydrogen storage alloys and porous substances have problems -- adsorption and desorption of hydrogen is irreversible and operating capacity at room temperature is poor. Therefore, their applications are limited.

Recently MOFs have been drawing attention as candidates for hydrogen storage material; however, since they accomplish physical adsorption by making use of features of crystal structure of 3-dimensional framework, it is difficult to develop their operating capacity at room temperature.

These researchers overcame these difficulties by suggesting and examining the possibilities of new storage structures different from those of conventional physical adsorption and chemical adsorption.Their achievement in making use of self-assembly, synthesis techniques will contribute to the realization of a hydrogen-based society from the viewpoint of hydrogen storage.

Metal–organic frameworks (MOFs) have attracted widespread attention owing to their unusual structure and properties produced by their nanospaces. However, many MOFs possess the similar three-dimensional frameworks, limiting their structural variety and operating capacity for hydrogen storage under ambient conditions. Here we report the synthesis and structural characterization of a single-crystal one-dimensional dimer whose structure, operating capacity, and physical mechanism contrast with those of existing MOFs. The hydrogen storage capacity of 2.6 wt.% is comparable to the highest capacity achieved by existing MOFs at room temperature. This exceptional storage capacity is realized by self-organization during crystal growth using a weak base. 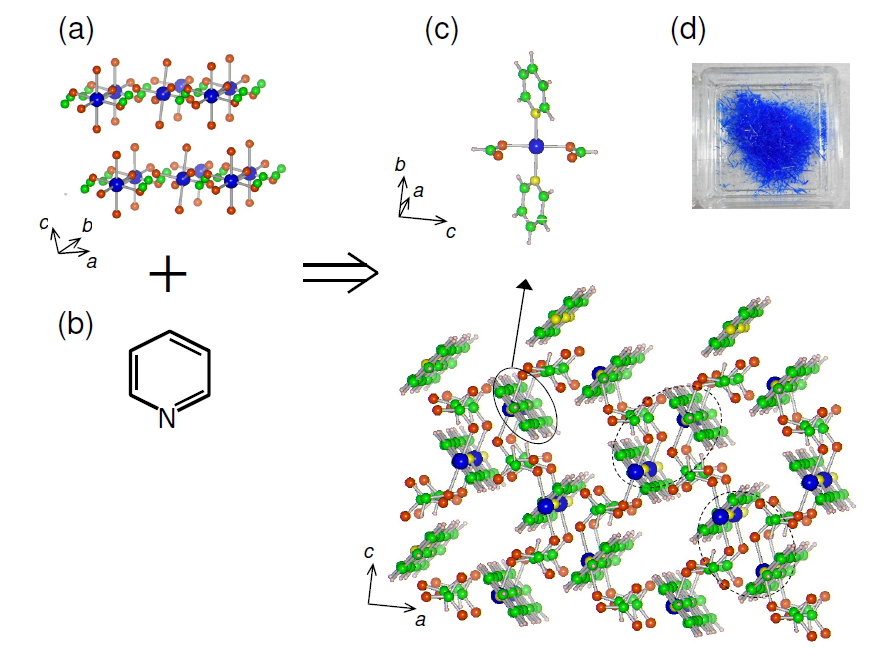 To learn more about this research, please view the full research report entitled " Hydrogen atom trapping in a self-organized one-dimensional dimer " at this page of the APL Materials website.