Researchers at Osaka University invent tunable microparticles that can assemble into larger structures based on the content of attached chemical groups, which may lead to the development of smart sensors or self-healing materials

Scientists from the Graduate School of Science at Osaka University created superabsorbent polymer (SAP) microparticles that self-assemble into structures that can be modified by adjusting the proportion of particle type. This research may lead to new tunable biomimetic “smart materials” that can sense and respond to specific chemicals.

Biological molecules in living organisms have a remarkable ability to form self-assembled structures when triggered by an external molecule. This has led scientists to try to create other “smart materials” that respond to their environment. Now, a team of researchers at Osaka University has come up with a tunable system involving poly(sodium acrylate) microparticles that can have one of two types of chemical groups attached. The adjustable parameters x and y refer to the molar percent of microparticles with β-cyclodextrin (βCD) and adamantyl (Ad) residues, respectively.

“We found that the macroscopic shape of assemblies formed by microparticles was dependent on the residue content,” co-senior author Akihito Hashidzume says. In order for assemblies to form, x needed to be at least 22.3; however, the shape of assemblies could be controlled by varying y. As the value of y increased, the clusters became more and more elongated. The team hypothesized that at higher values of y, small clusters could form early and stick together, leading to elongated aggregates. Conversely, when y was small, clusters would only stick together after many collisions, resulting in more spherical aggregates. This provides a way to tune to the shape of the resulting clusters. The team measured the aggregates under a microscope to determine the shapes of assemblies using a statistical analysis.

“On the basis of these findings, we hope to help reveal the origin of the diverse shape of living organisms, which are macroscopic assemblies controlled by molecular recognition,” co-senior author Akira Harada says. This research may also lead to the development of new smart sensors that can form clusters large enough to be seen with the naked eye. 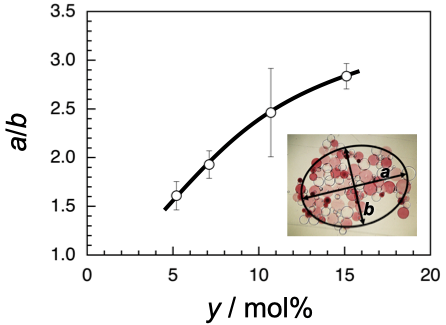 Fig. 2 The aspect ratio of the aggregate (a/b) as a function of the Ad content, y. Elongated aggregates were formed at larger y, at which the interaction was stronger.

The article, “The macroscopic shape of assemblies formed from microparticles based on host–guest interaction dependent on the guest content,” was published in Scientific Reports at DOI: https://doi.org/10.1038/s41598-021-85816-z