A group of researchers from Osaka University achieved an enantioselective (selectively acting on two isomers) Friedel–Crafts alkylation reaction using artificial metalloenzymes, in which a transfer metal complex is incorporated into monoclonal antibodies, succeeding in a carbon-carbon (C-C) bond formation.

The C-C bond formation is important for synthesizing a variety of artificial chemical materials, such as medicines and synthetic resin. Thus, how to control the stereo structure of chemical compounds to be produced has drawn attention.

To develop metalloenzymes that enable stereoselective catalysis, it is important to precisely control a specific field around a catalytically active site, so various types of ligand have been developed. In order to enhance efficiency and selectivity of reactions, it is necessary to produce a protein that can offer an active site, or the region of an enzyme where substrate molecules bind and catalyze a reaction of the molecules.

Focusing on monoclonal antibodies, which are chemically homogeneous antibodies that have received much attention as designable protein scaffolds for artificial metalloenzymes, this group tried to control enantioselectivity of catalysis by controlling the environment around a metal complex incorporated into antibodies, through use of anti-BN mAbs.

This group created artificial metalloenzymes through complexation of mAbs, which recognize axial chirality of a binaphthyl derivative (BN), with a Cu complex with structurally similar ligands with binaphthyl, i.e., 1,1’ -bi-isoquinoline (BIQ). The artificial metalloenzymes showed excellent enantioselectivity in catalyzing Friedel–Crafts alkylation. It is thought that an environment surrounding the catalytically active site made by catalytic monoclonal antibodies controls a stereo structure of catalytic reaction.

This group has allowed for use of a metal complex as an asymmetric catalyst. Moving forward, this group’s achievements will be used as a method for producing useful substances, including medicines and other chiral chemical compounds, which needs precise stereo control. 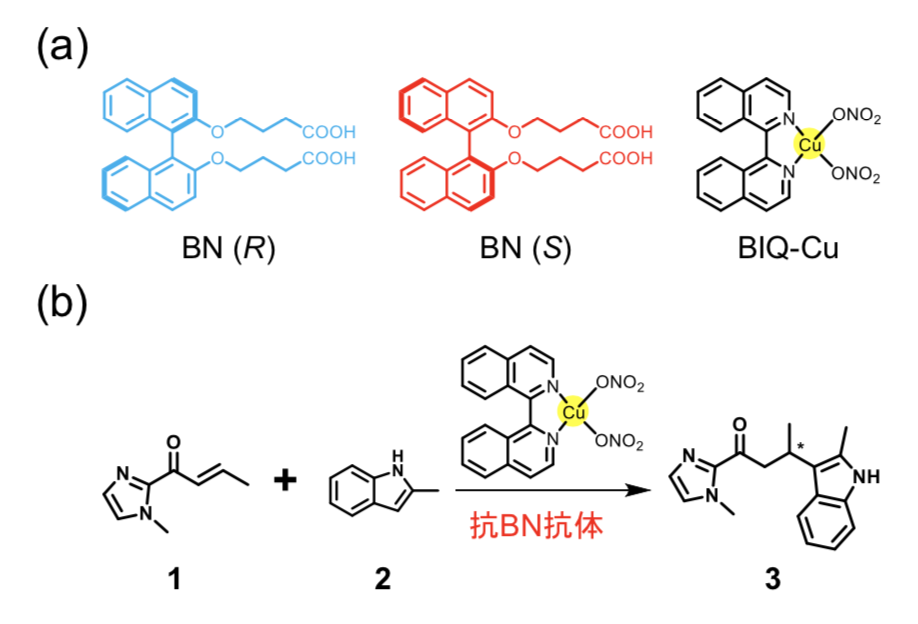