One of the most important tasks in modern information technologies is controlling spin directions in magnets. State-of-the-art hard disk drives and large-volume magnetic storage used in data centers require magnetization in solids to switch their directions in nanoseconds, corresponding to GHz frequency, or even faster speeds. An ever-increasing demand for writing speed has pushed researchers towards extensive research in optical techniques using femtosecond laser pulses.

When very short, intense laser pulses in the near-infrared wavelength range are absorbed in magnets, a complex energy exchange occurs between the electronic, lattice, and spin systems, resulting in the modification of magnetic anisotropy. Understanding how such internal energy transfers between subsystems following ultrafast photoexcitation result in the change of magnetic anisotropy is crucial for the implementation of efficient and ultrafast magnetic recording, reaching beyond picoseconds or even femtoseconds in the future.

In this work, researchers from University of Konstanz, The University of Tokyo, and Osaka University have shown that the photoexcitation of electronic and lattice degrees of freedom at femtosecond time scales results in distinctly different temporal evolutions of the magnetic anisotropy in the prototypical weak ferromagnet Sm0.7Er0.3FeO3.

This rare-earth orthoferrite exhibits a so-called spin reorientation transition (SRT) in which a change of the spin direction occurs at a critical temperature. By irradiating the sample with an intense, femtosecond mid-infrared laser pulse resonantly tuned to a phonon frequency and probing the ultrafast spin dynamics due to spin reorientation, the SRT was found to occur with a delayed onset. Here, the relatively slow thermalization of the crystal lattice limits the spin dynamics. In contrast, when exciting the 4f electronic transition of the rare-earth Sm3+ ions, it was found that the SRT dynamics started immediately.

This result indicates that the magnetic anisotropy is altered by means of a purely electronic change without emitting excessive heat into the lattice system. The data indicate that the speed of this ultrafast anisotropy modification reaches a time scale of tens of femtoseconds – much faster than the spin dynamics itself. Thus, the 4f electronic pumping may allow for ultrafast “triggering” of the magnetization switching in future spintronics devices that operate below picosecond time scales.

“The influence of the ultrafast lattice heating following infrared photoexcitation has been widely investigated so far. However, this is the first time that the roles of the lattice and electronic transitions on the ultrafast magnetic anisotropy have been clearly distinguished at femtosecond time scales”, authors say.

Since transition-metal compounds that contain rare-earth elements are among the most widely used magnets in the modern world, the scheme demonstrated here is expected to pave the way for a new non-thermal route to ultrafast control of spin dynamics in an important class of materials. 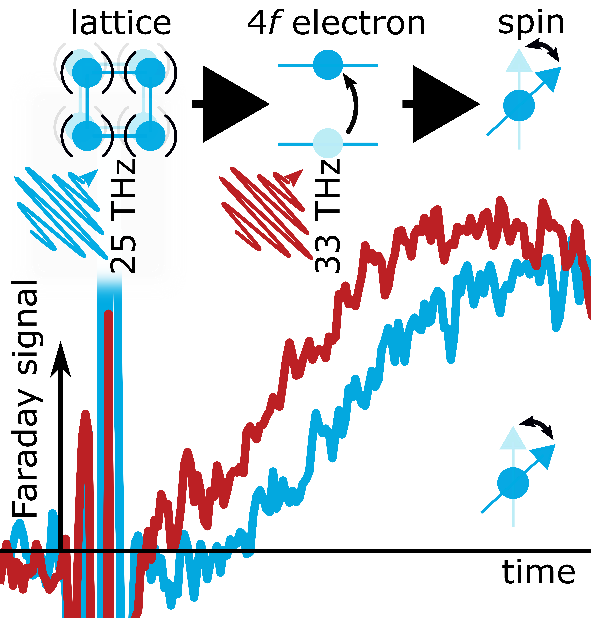 The article, “Ultrafast control of magnetic anisotropy by resonant excitation of 4f electrons and phonons in Sm0.7Er0.3FeO3,” was published in Physical Review Letters at https://doi.org/10.1103/PhysRevLett.127.107401.