Seeing both the forest and the trees: Trans-scale scope shows big picture of tiny targets

Researchers at Osaka University use a 120-megapixel camera to simultaneously image over a million cells in a single microscope field of view, a feat which may accelerate the study of population dynamics and rare biological phenomena

Scientists from the Transdimensional Life Imaging Division of the Institute for Open and Transdisciplinary Research Initiatives (OTRI) at Osaka University created an optical imaging system that can capture an unprecedented number of cells in a single image. By combining an ultra-high pixel camera and a huge lens, the team was able to easily observe exceedingly rare, “one-in-a-million” situations. This work provides a valuable new tool for the simultaneous observation of centimeter-scale dynamics of multicellular populations with micrometer resolution to see the functions of individual cells.

In biology, scientists are often interested in the outliers of a population, such as cells with a rare function that may appear in fewer than one in a million individuals. These experiments have been hampered by the inherent tradeoff with microscopes between seeing cells at a sufficient spatial resolution while still maintaining a large enough field of view to capture unusual specimens. Scientists often spend several minutes moving slides in search of just the right cells to study.

Now, a team of scientists led by Osaka University has devised a system that can produce an image containing up to a million cells at once. “Conventional biological microscopes can observe at most 1,000 cells, with a field of view limited to a few millimeters. Our setup uses machine vision powered by a high-pixel camera with a macro lens,” first author Taro Ichimura says. The team built the optical imaging system with a 120-megapixel camera and a telecentric macro lens. This provided a much larger field of view than conventional microscopes, up to about one and half by one centimeter, while still resolving individual cells and the interactions between them that characterize the population. The team termed the imaging technology “trans-scale scope,” which signifies that the technology can be applied to imaging from the micrometer-scale to the centimeter-scale. “As a technological singularity for a powerful cell measurement, our trans-scale scope system AMATERAS is expected to contribute to a wide range of applications, from basic research for understanding the operating mechanism of multicellular systems, to medical applications such as the quality control of artificial cell sheets,” senior author Takeharu Nagai says.

The team tested the AMATERAS by dynamically imaging calcium ions in cultured cells and successfully detected anomalies that occurred in less than 0.01% of specimens. This work may accelerate research in a wide range of fields that deal with large cell populations, such as neuroscience, oncology, and immunology.

A multicolor image of a mouse brain slice with two regions indicated by light blue squares, namely, the cerebral cortex (A) and the hippocampus (B). These are displayed in the whole-brain image (left) and digitally magnified 5x (middle). The local regions of light blue squares in the 5x images are further digitally magnified five times (right). Red, green, and blue represent the fluorescence due to a red fluorescent protein expression in excitatory projection neurons, a green fluorescent protein expression in inhibitory interneurons, and Hoechst 33342 attached to nuclear DNA, respectively. (credit: ©2021 T. Ichimura et al., Scientific Reports) 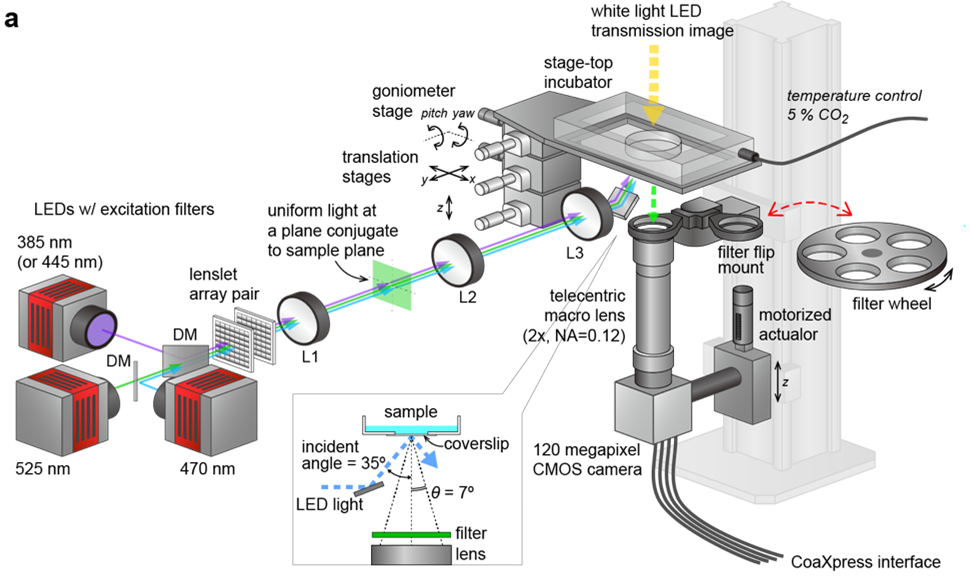