Generation of conjunctivae in a dish

Conjunctival tissue is perhaps most recognizable to the average person in relation to conjunctivitis—but it’s a vital part of eye functionality and protection. In a new study, researchers from Osaka University generated functional conjunctival tissue in a dish by identifying the key protein factors that drive the development and maturation of conjunctival cells.

The eye is a complex organ consisting of several different types of tissues, each of which fulfill a specific purpose to guarantee the full functionality of the eye. An important contributor to eye function is healthy tear production, which ensures that the eyes do not dry out. Dry eye disease is a common occurrence in modern people and lead to irritation and inflammation of the eyes, and consequently impaired quality of vision. Tear fluid is partly maintained by conjunctival epithelium, a thin cell layer covering the sclera and the inside of eyelids. Understanding conjunctival biology and finding new remedies for dry eye disease requires the development of functional conjunctival tissue, which can then be used to discover novel drugs.

“Many eye diseases affect the parts of the eye that are directly involved in the process of seeing, such as the lens, the retina and the optic nerve,” says corresponding author of the study Ryuhei Hayashi. “In this study, we focused on the tissue lining up the outside of the eye and that is equally important for proper eyesight. The goal of our study was to identify those factors that are important for the generation of functional conjunctival tissue.”

To achieve their goal, the researchers asked two questions: 1) How can conjunctival cells be formed in a dish, and 2) How can these cells be matured into functional tissue that can replicate the human eye? To answer these questions, the researchers used human induced pluripotent stem cells (hiPSCs) that can be manipulated to become any cell of the body. The researchers generated self-formed ectodermal autonomous multi-zone (SEAM) of cells from hiPSCs, which is a cellular construct closely mimicking whole-eye development in a dish. The researchers focused on a specific subset of cells within the SEAM that functions as a progenitor to conjunctival cells. They then found that the protein epidermal growth factor (EGF) is required for the development of conjunctival cells, while the protein keratinocyte growth factor (KGF) is required for the maturation of conjunctival tissue.

But was the newly generated conjunctival tissue able to replicate the function of its counterpart in a living eye? To answer this question, the researchers investigated whether the tissue contained goblet cells that produce mucins, molecules that lubricate the surface of the eye, which plays an essential role in the function of human conjunctivae. They were able to show the tissue they formed from hiPSCs and SEAMs contained sufficient amounts of goblet cells, demonstrating that it makes a good model to study human conjunctival biology and disease in a dish.

“These are striking results that show how the eye can be closely mimicked in a dish. Our findings will help understand the biology of conjunctivae and could further help forming a model for drug screening and regenerative therapy to combat the effects of dry eye syndrome,” says first author of the study Kimihito Nomi. 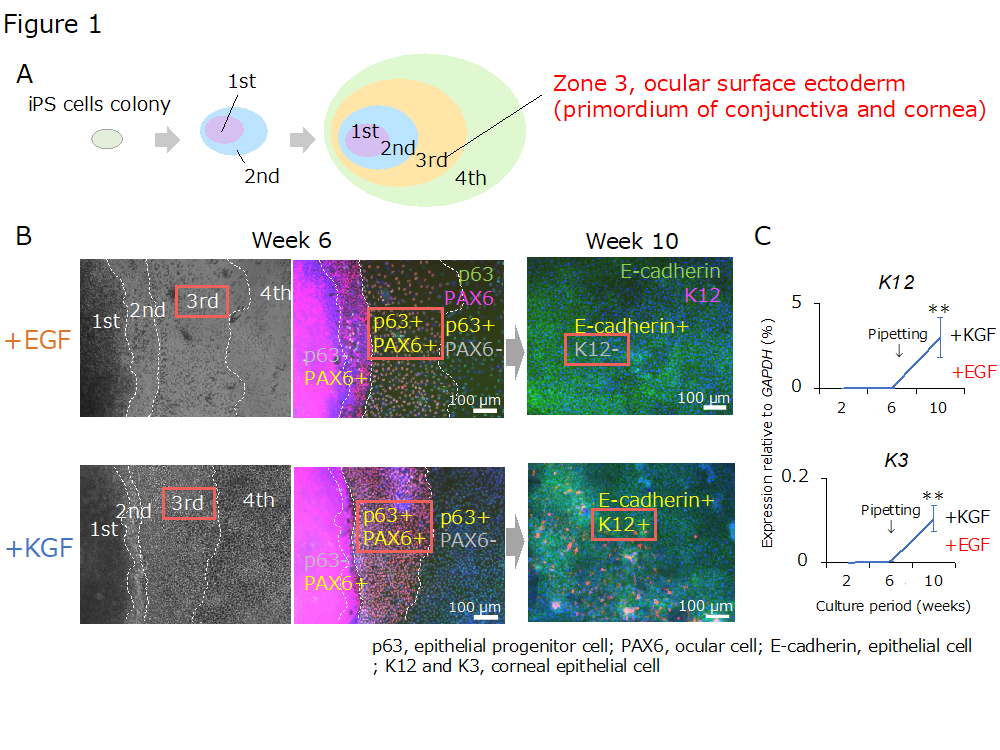 Figure 1. EGF prohibits the differentiation of cells within a hiPSC-derived SEAM into a corneal epithelial phenotype.

(A) iPSCs differentiate into four concentric zones in a SEAM and cells in zone 3 have characteristics of the ocular surface ectoderm. (B) Immunostaining of the EGF-treated SEAM (+EGF) and the KGF-treated SEAM (+KGF). In the EGF-treated SEAM, K12 (a corneal epithelial cell marker) was not detected at 10 weeks after the start of differentiation. (C) Gene expression analysis revealed that corneal epithelial cell markers (K12 and K3) expressions were downregulated significantly (**p < 0.01), which is similar to the results of immunostaining. 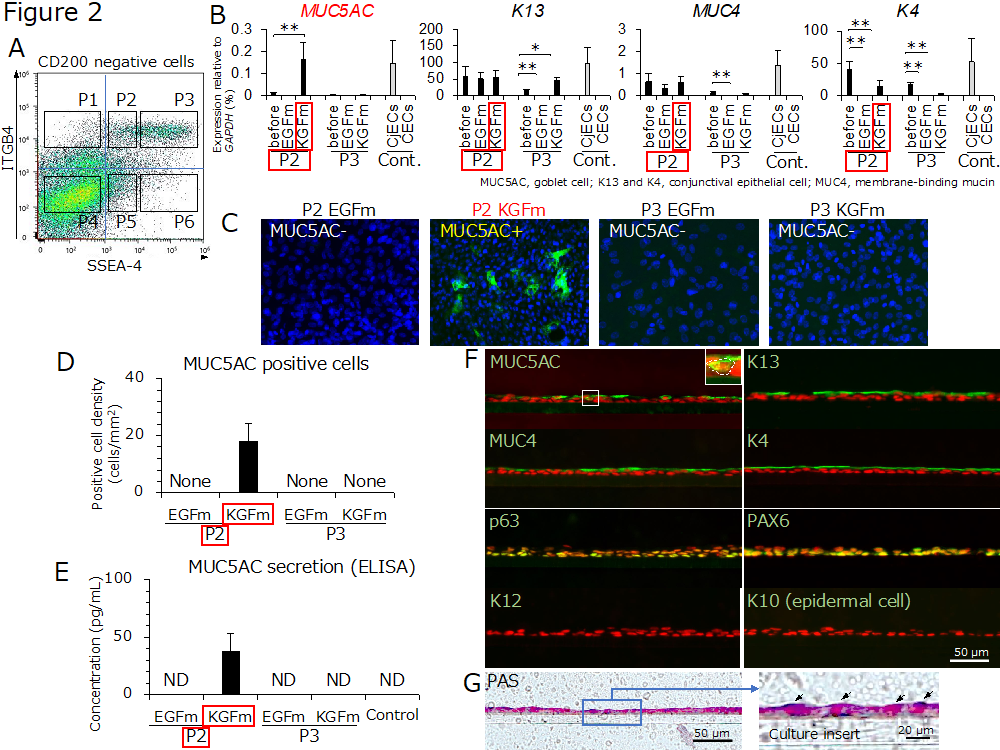 (A) FACS analysis of CD200, SSEA-4, and ITGB4 for the EGF-treated SEAM derivative after 10–14 weeks of culture. (B) Gene expression analysis of conjunctival epithelium-related markers for the P2 and P3 cells before and after maturation culture. (C) Immunostaining for MUC5AC of the P2 and P3 fraction cells after maturation culture. (D) The density of MUC5AC-positive cells. (E) ELISA for MUC5AC in culture supernatants. (F) Immunostaining of human iPS cell-derived conjunctival epithelium. (G) PAS staining. 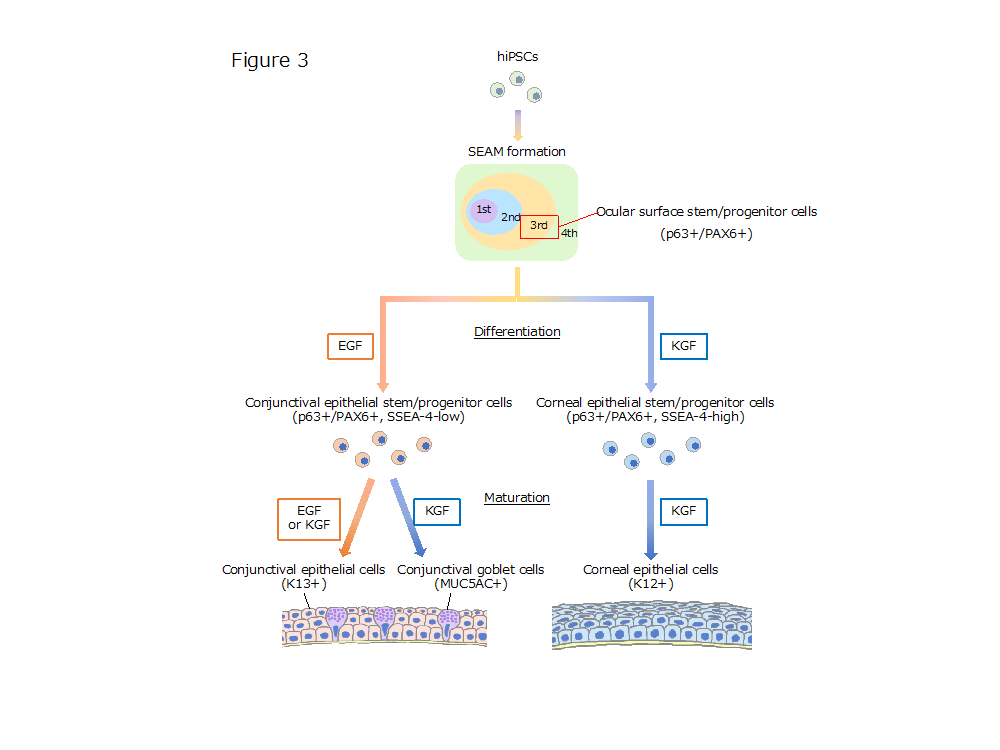 hiPSCs were differentiated to form SEAMs. Ocular surface epithelial stem/progenitor cells, which express p63 and PAX6, are present in zone 3 of the SEAM. In differentiation culture, conjunctival epithelial lineage cells were predominantly seen in the EGF-treated SEAM derivatives, while KGF promotes the development of corneal epithelial lineage cells. Conversely, KGF is necessary for the maturation of the hiPSC/SEAM-derived conjunctival epithelium and the formation of mucin-producing goblet cells.

The article, “Generation of functional conjunctival epithelium, including goblet cells, from human iPSCs” was published in Cell Reports at DOI: https://doi.org/10.1016/j.celrep.2021.108715.