The basic structure of a fuel cell, a pollution-free, highly efficient energy generator that converts chemical energy to electricity, consists of a solid electrolyte that allows only ions to pass through. To improve performance of SOFCs, chemically stable solid electrolytes with high ion conductivity are necessary.

In the electrolyte of SOFCs, an ion, or a charge carrier, hops to an adjacent vacant site after numerous attempts in the span of one ten-trillionth of a second (1x10 -13 sec). When ion hopping occurs, the amplitude of attempt frequency becomes large and the attempt just before hopping slows down. This group thought that if this microscopic motion of the ion just before hopping to an unoccupied site is obtained by THz-TDS, they could obtain information about the conductive properties of solid electrolytes.

THz-TDS is a spectroscopic technique in which the properties of matter are probed with short pulses of terahertz radiation and the THz frequency band enables short-distance large-capacity wireless communications. Measuring with THz waves is used as non-contact, non-destructive technology.

In verification experiments using THz-TDS, the researchers measured the conductivity and its temperature dependency in yttria-stabilized zirconia Zr 0.84 Y 0.16 O 2−δ (8YSZ), a widely used solid electrolyte material, to evaluate energy necessary for ion migration (activation energy). The low-frequency activation energy was obtained by impedance measurements, but, in measurements using THz waves, the THz activation energy decreased with the ionic radius of the dopant. The evaluated conductivity includes the information on the microscopic motion of the ion just before hopping to an unoccupied site occurs, which cannot easily be evaluated by conventional techniques.

Typically, the effective lattice constant increases with an increase of the dopant ionic radius, so the energy of the potential barrier at the Zr–Zr saddle point, or the energy required for the hopping to the next equivalent site, is reduced, making ionic migration easier. Thus, the group concluded that activation energy determined by the THz-TDS conductivity measurements reflected the intrinsic migration energy of the oxygen vacancy and that impedance measurements would not be able to obtain this information. 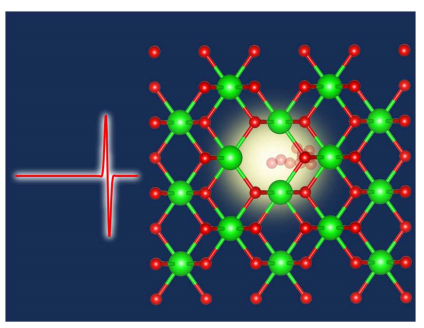 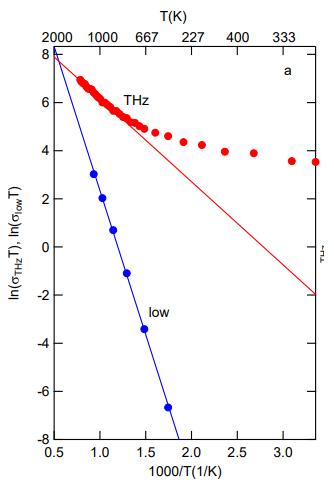 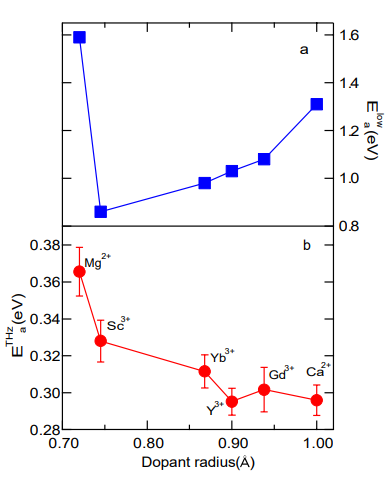 The article, "Microscopic ion migration in solid electrolytes revealed by terahertz-time-domain-spectroscopy" was published in the Nature Communications at DOI: https://doi.org/10.1038/s41467-019-10501-9 .