Cause of variability in human stereoacuity clarified

Will help improve the ability to discriminate depth

A team of researchers led by Researchers Hiromasa TAKEMURA and Kaoru AMANO from the Center for Information and Neural Networks (CiNet), National Institute of Information and Communications Technology (NICT) and Professor Ichiro FUJITA at the Graduate School of Frontier Biosciences, Osaka University, using the latest MRI measurements, discovered that there were differences in neural tissue density in the vertical occipital fasciculus (VOF), a white matter tract connecting the dorsal and ventral visual cortex, between the good stereoacuity and poor stereoacuity groups.

Humans perceive the relative location of objects using their ability to perceive depth. This depth discrimination (stereoacuity) is critical visual perception, playing an important role in various scenes from driving a car to playing sports. Findings from research on stereoacuity on the basis of binocular disparity are widely used in virtual reality technology to maximize the feeling of being present.

CiNet of the NICT, in collaboration with Osaka University, is promoting research and development to combine brain science with information communication technology in order to establish new information and communications technology that can be learned from the brain. In this study, the researchers focused on the fasciculus, a major tract connecting dorsal and ventral visual areas, as a neural foundation to cause individual differences in variability. Using MRI, they examined their hypothesis that individual differences in stereoacuity relates to structural difference in the fasciculus that connects visual areas in the brain.

The researchers performed tractography on the dMRI dataset to identify the trajectory of major visual white matter tracts, measuring neural tissue density of the fasciculus by quantitative MRI (qMRI). They also performed psychophysical experiments to measure stereoacuity of the same participants in the experiments using MRI.

They analyzed the relationship between neural tissue density and stereoacuity and found:

These results suggest that variability in human stereoacuity is associated with microstructural differences in the pathways that support information transmission across dorsal and ventral visual areas through VOF. Moving forward, detailed study of the relationship between VOF and stereoacuity will help improve the ability to discriminate depth in people with weak sight. By advancing research and technological development for evaluating individual differences in stereoacuity, this group’s achievements will lead to the development of image presentation technology in consideration of individual differences in depth perception.

Stereopsis is a fundamental visual function that has been studied extensively. However, it is not clear why depth discrimination (stereoacuity) varies more significantly among people than other modalities. Previous studies have reported the involvement of both dorsal and ventral visual areas in stereopsis, implying that not only neural computations in cortical areas but also the anatomical properties of white matter tracts connecting those areas can impact stereopsis. Here, we studied how human stereoacuity relates to white matter properties by combining psychophysics, diffusion MRI (dMRI), and quantitative MRI (qMRI). We performed a psychophysical experiment to measure stereoacuity and, in the same participants, we analyzed the microstructural properties of visual white matter tracts on the basis of two independent measurements, dMRI (fractional anisotropy, FA) and qMRI (macromolecular tissue volume; MTV). Microstructural properties along the right vertical occipital fasciculus (VOF), a major tract connecting dorsal and ventral visual areas, were highly correlated with measures of stereoacuity. This result was consistent for both FA and MTV, suggesting that the behavioral–structural relationship reflects differences in neural tissue density, rather than differences in the morphological configuration of fibers. fMRI confirmed that binocular disparity stimuli activated the dorsal and ventral visual regions near VOF endpoints. No other occipital tracts explained the variance in stereoacuity. In addition, the VOF properties were not associated with differences in performance on a different psychophysical task (contrast detection). These series of experiments suggest that stereoscopic depth discrimination performance is, at least in part, constrained by dorso-ventral communication through the VOF. 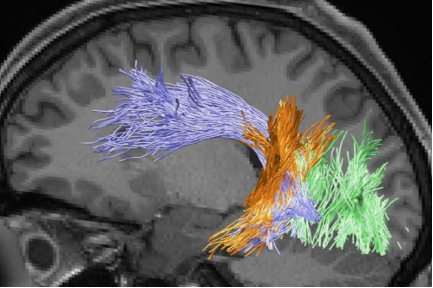 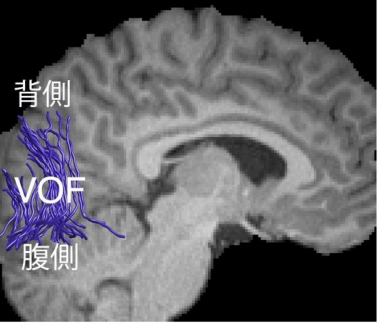 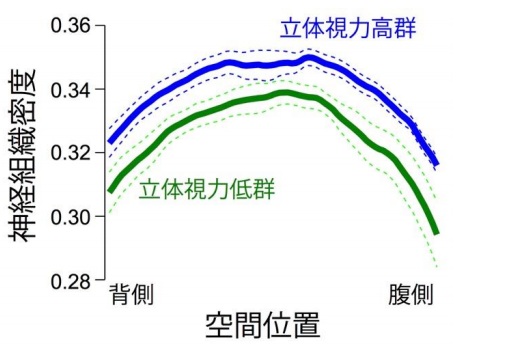 The article, “Microstructural properties of the vertical occipital fasciculus explain the variability in human stereoacuity” was published in PNAS at DOI: https://doi.org/10.1073/pnas.1804741115 .