Mystery of circles on the sea bed uncovered

A joint research group consisting of students and researchers in the Humanware Innovation Program at Osaka University and Senior Researcher Hiroshi Kawase at the Costal Branch of the Natural History Museum and Institute, Chiba, extracted a portion of the rules for construction of a large sandy nest structure resembling a mysterious crop circle built by a male white-spotted pufferfish, Torquigener albomaculosus , using computer simulations based on the analysis of the fish's behavior.

These mysterious circles were discovered on the seabed around Amami-Oshima Island in southwest Japan around 1995. The circle was approximately 2 meters in diameter and consisted of radially arranged deep ditches in the outer ring region and maze-like shallow ditches in the central region. Its geometrical configuration was called a “mysterious circle on the sea bottom,” which gained some attention. Later in 2011, it was found that this geometric structure was a spawning bed for attracting female mates and was made by the white-spotted pufferfish, Torquigener albomaculosus . This species was new to science.

The researchers, led by Senior Researcher Kawase, created computer simulations based on video recordings around Amami-Oshima Island and analysis of the pufferfish's behavior. They focused on the radial ditches in the outer ring region. According to the video recordings, the direction of the ditch was fairly random in the early stage. The pufferfish excavated ditches along a straight line by destroying the pre-formed immature ditches; however, a radial structure gradually appeared.

They recorded the pufferfish’s “entry position,” “direction of excavation,” “length of excavation,” and variations in these data, constructed a simulation program based on the data, and attempted to see if computer simulations could reproduce accurate nest formation. As a result, it was found that when the pufferfish preferred a lower place to ditch when selecting the entry position, an accurate radial structure was made even through seemingly random excavation behavior. That is, the unexpected rules for construction were: the pufferfish chooses a spot that is a bit lower and excavates toward the randomly chosen center region.

This study shows that an apparently irregular and random process actually governs the construction of a regular structure, which could be used for industrial techniques in the future. Senior Researcher Hiroshi Kawase says, “In this study, we only created computer simulations, but we’d like to get a robot pufferfish to build mysterious circles in a natural environment in the future. We can hardly wait for that.”

A small (~10 cm) male pufferfish (Torquigener albomaculosus) builds a large (~2 m) sandy nest structure, resembling a mysterious crop circle, to attract females. The circle consists of radially arranged deep ditches in the outer ring region, and maze-like shallow ditches in the central region. The configuration is geometrical. Here, we examined the process of the outer ring construction, and extracted the ‘rules’ followed by the pufferfish. During construction, the pufferfish repeatedly excavates ditches from the outside in. Generally, excavation starts at lower positions, and occurs in straight lines. The entry position, the length, and the direction of each ditch were recorded. A simulation program based on these data successfully reproduced the circle pattern, suggesting that the complex circle structure can be created by the repetition of simple actions by the pufferfish. 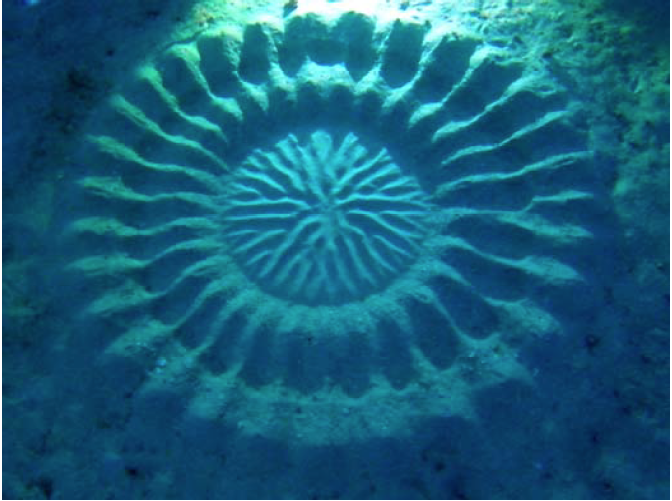 Figure 1 . Mysterious circle on the seabed around Amami Oshima Island. The geometric pattern of 2 m in diameter is built by a 10 cm puffer fish. (Credit: Hiroshi Kawase, Costal Branch of Natural History Museum and Institute, Chiba)