A group of researchers led by Associate Professor Takashi YAMAMOTO and Assistant Professor Rikizo IKUTA, and Professor Emeritus Nobuyuki IMOTO of Osaka University, Research Manager Kazuhiro HAYASAKA of the Advanced ICT Research Institute, National Institute of Information and Communications Technology (NICT), and Professor Matthias Keller of the Department of Physics and Astronomy, University of Sussex, succeeded in the transmission of single photons from single trapped ions coupled to optical cavities over a 10 km optical fiber.

Quantum cryptography allows for communication that is guaranteed to be secure and not be decoded, but it’s essential to reduce the high attenuation of photons (carriers of quantum information) in optical fibers. Quantum information is lost in existing repeaters, so quantum repeaters that work using quantum-mechanical phenomena, such as superposition and entanglement, are necessary.

In quantum repeaters, it’s important to construct quantum logic gates necessary for quantum computing by detecting photons. Trapped ions, carriers of quantum information that realize quantum operations, can serve as quantum repeaters. However, conventional trapped ions were unsuitable for long-distance transmission because of high attenuation of photons in optical fibers. In this study, the loss of photons was drastically reduced via quantum frequency conversion.

The researchers developed a frequency converter with high efficiency and low noise, which converts photons with resonant wavelength of 866 nm to 1550 nm, the most widely used wavelength in optical communication systems, known as the telecom C band. This has solved problems regarding incompatible frequencies in quantum communication.

They achieved the transmission of single photons from a single 40 Ca + ion coupled to an optical cavity (a trapped ion) over a 10 km optical fiber via frequency conversion by reducing losses as photons emitted by trapped ion systems. The converter has a high efficiency exceeding that of direct transmission of single photons of 866 nm wavelength, showing its superiority.

This study showed that trapped calcium ions could be used as a medium for quantum optics in optical fiber communication. Further improvement of this frequency converter will make it possible to convert the wavelength of photons entangled with calcium ions to a wavelength suitable for optic fiber communication to form a quantum network. Furthermore, if it becomes possible to perform quantum information processing for manipulating quantum states of light using calcium ions as quantum logic gates, quantum repeaters that allow for long-distance cryptography communication will be realized.

Trapped atomic ions are ideal single photon emitters with long-lived internal states which can be entangled with emitted photons. Coupling the ion to an optical cavity enables the efficient emission of single photons into a single spatial mode and grants control over their temporal shape. These features are key for quantum information processing and quantum communication. However, the photons emitted by these systems are unsuitable for long-distance transmission due to their wavelengths. Here we report the transmission of single photons from a single 40 Ca + ion coupled to an optical cavity over a 10 km optical fiber via frequency conversion from 866 nm to the telecom C band at 1530 nm. We observe nonclassical photon statistics of the direct cavity emission, the converted photons, and the 10 km transmitted photons, as well as the preservation of the photons’ temporal shape throughout. This telecommunication-ready system can be a key component for long-distance quantum communication as well as future cloud quantum computation. 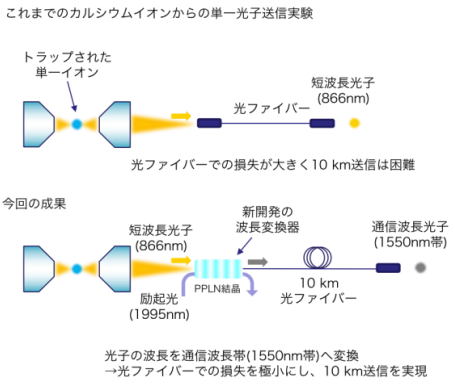 
To learn more about this research, please view the full research report entitled " Long-distance single photon transmission from a trapped ion via quantum frequency conversion " a t this page of Physical Review Letters .