Flagella are tiny rotary motors that move bacteria. A research team led by Keiichi Namba, professor at Osaka University has used electron cryomicroscopy to show that a small difference of only several amino acids can have a large impact on flagella function. The study gives new insight on the construction of synthetic nanomachines and can be read in Nature Communications .

The flagellar motor can be subdivided into three subunits that include the helical propeller (filament), universal joint (hook), and drive shaft (rod). The hook is flexible and transmits torque to the filament, while the rod is remarkably stiff and can rotate >1000 Hz in some bacteria. The hook is 55 nm long and 18 nm wide, and the rod is 20 nm long and 13 nm wide. Structurally, the hook consists of one protein, FlgE, while the rod consists of several proteins, but only FlgG is in direct contact with the hook. FlgE and FlgG include two domains that are thought responsible for the very different mechanical properties of the rod and hook even though in many ways the domains are almost identical.

"The different functions can be explained by how the domains are packed," said Namba, whose lab studies nanomachines in nature, adding that, "In the rod, they are highly packed, which makes the rod rigid. In the hook, the domains are spaced out, giving the hook flexibility."

High-resolution electron cryomicroscopy images and corresponding atomic models suggested the different packing is related to a slightly different tilt of 7 o in the orientation of the domains. This 7 o tilt reduces the packing, which allows the hook protofilament to compress and expand, explaining its flexibility.

Namba noted that although similar, one particular part the two proteins is longer in FlgG by 18 amino acids. To confirm that these amino acids determined the rigidity of the rod, his team inserted them to the hook protein and found that the hook became much stiffer.

"The 18 amino acid insert shows how a small changes can drastically change the behavior of a nanomachine," he said.

Understanding the structural design of the flagellar motor is expected to provide a blueprint for the synthetic construction of similar nanomachines.

The bacterial flagellum is a motile organelle driven by a rotary motor, and its axial portions function as a drive shaft (rod), a universal joint (hook) and a helical propeller (filament). The rod and hook are directly connected to each other, with their subunit proteins FlgG and FlgE having 39% sequence identity, but show distinct mechanical properties; the rod is straight and rigid as a drive shaft whereas the hook is flexible in bending as a universal joint. Here we report the structure of the rod and comparison with that of the hook. While these two structures have the same helical symmetry and repeat distance and nearly identical folds of corresponding domains, the domain orientations differ by ∼ 7°, resulting in tight and loose axial subunit packing in the rod and hook, respectively, conferring the rigidity on the rod and flexibility on the hook. This provides a good example of versatile use of a protein structure in biological organisms. 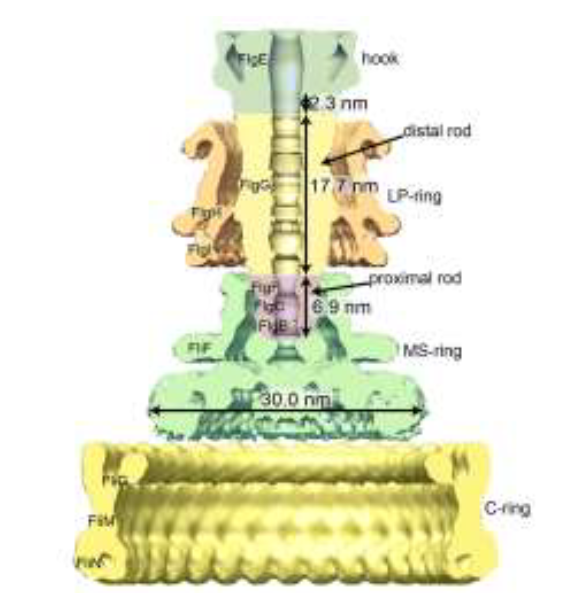 Figure 1. Schematic diagram of the bacterial flagellar basal body with name and size of each part. 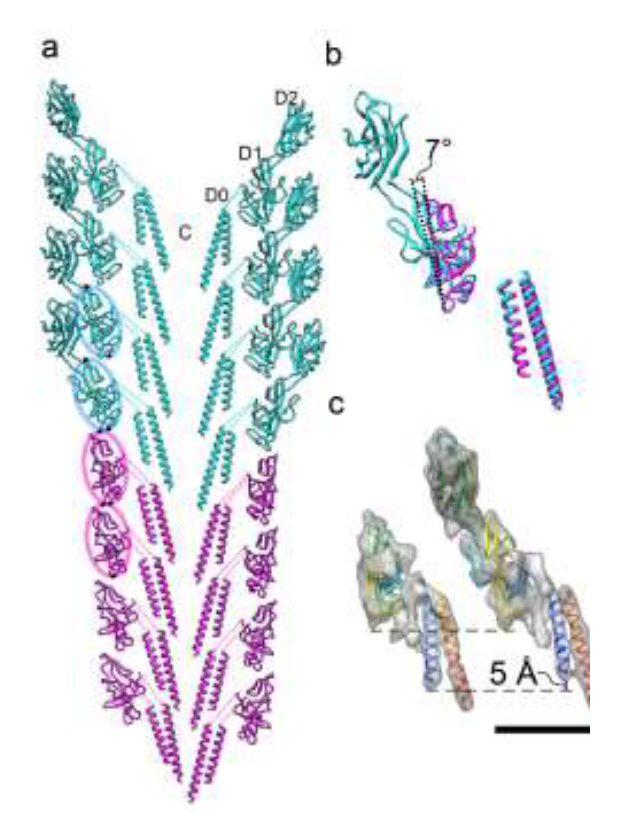 Figure 2. Molecular models of the flagellar rod (purple) and hook (blue green) and their comparison. (a) The model of the rod and hook complex including their direct connection in a section along their tubular axis. The structures of their corresponding domains are nearly identical. (b) Structural comparison of the rod and hook subunits by superposition. Domain D1 of the hook protein is more tilted than that of the rod protein by 7°, producing a gap between subunits in the axial neighbors to make the entire hook flexible in bending. (c) The C-terminal helix (blue) of the hook is shorter than that of the rod, making an axial gap between subunits in the hook structure but not in the rod.

To learn more about this research, please view the full research report entitled “ Identical folds used for distinct mechanical functions of the bacterial flagellar rod and hook ” at this page of the Nature Communications website.