An important step to the clarification of formation process of planets

Thousands of planetary systems have been discovered since the discovery of the first exoplanet in 1995. Most planets were discovered by transit and radial velocity methods and are hot planets that are orbiting closely around their host stars. Surface temperatures of the planet decrease with distance from the host star. Cold planets far away beyond the snow line, the distance where it is cold enough for ice to condense, become ice planets. It’s difficult to detect planets far from the host star by the transit or radial velocity method.

The Microlensing Observations in Astrophysics (MOA) group led by Associate Professor SUMI Takahiro at the Graduate School of Science, Osaka University, ABE Fumio Associate Professor at the Solar-Terrestrial Environment Laboratory, Nagoya University, and Researcher SUZUKI Daisuke at the Goddard Space Flight Center, by observing microlensing events in the Galactic bulge, discovered that of extrasolar planets, of ice planets in particular, the majority of planets were the mass of Neptune (which is 17 times the mass of Earth), a world first.

This group has been exploring extrasolar planets through observation of microlensing events by using the 1.8 m MOA-II telescope at Mt. John University Observatory in New Zealand. Microlensing events occur because the path of light is bent in a gravitational field as Einstein’s theory of general relativity predicts. When a star (lens star) happens to pass over another star (source star), light from the source star bends and converges due to the gravity of the lens star as if it went through the lens, the source star suddenly looks brighter. In the case where a star like the sun becomes the lens star, the source star becomes brighter monotonously for dozens of days and goes back to its original brightness in the same amount of time. However, if there is a planet around this lens star (host star), planetary deviations due to the gravity of the planet occur. These deviations suggest the existence of the planet.

This group discovered that planets of Neptune-mass existed some 10 times more than giant gas planets such as Jupiter (Jupiter’s mass is 318 times that of Earth). This reconfirms the conventionally-known trend with a higher accuracy. Furthermore, this group found that the number of planets that were lighter than Neptune are comparable to or less than that of planets with a mass similar to that of Neptune.

This discovery will become a hint for clarifying how planets, including those in the solar system, were formed. Because there are many materials to form planets just outside of the snow line, it is thought that planets are formed most efficiently in that area. Surveys on cold planets, especially on planets that are lighter than Saturn, whose mass is 95 times that of Earth, can be performed only through the microlensing method. It is thought that detailed distribution of cold planets will be clarified through observation using the microlensing method.

We report the results of the statistical analysis of planetary signals discovered in MOA-II microlensing survey alert system events from 2007 to 2012. We determine the survey sensitivity as a function of planet–star mass ratio, q, and projected planet–star separation, s, in Einstein radius units. We find that the mass-ratio function is not a single power law, but has a change in slope at q ~ 10 −4 , corresponding to ~20 M ⊕ for the median host-star mass of ~0.6

. We find significant planetary signals in 23 of the 1474 alert events that are well-characterized by the MOA-II survey data alone. Data from other groups are used only to characterize planetary signals that have been identified in the MOA data alone. The distribution of mass ratios and separations of the planets found in our sample are well fit by a broken power-law model of the form

for q < q br , where q br is the mass ratio of the break. We also combine this analysis with the previous analyses of Gould et al. and Cassan et al., bringing the total sample to 30 planets. This combined analysis yields

for q br ≡ 1.7 × 10 −4 . The unbroken power-law model is disfavored with a p-value of 0.0022, which corresponds to a Bayes factor of 27 favoring the broken power-law model. These results imply that cold Neptunes are likely to be the most common type of planets beyond the snow line. 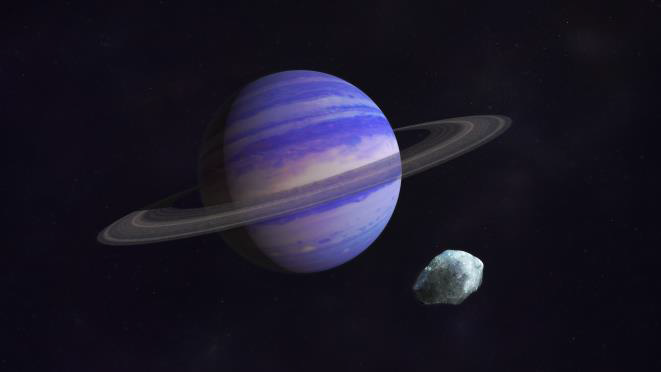 To learn more about this research, please view the full research report entitled “ The Exoplanet Mass-Ratio Function from the MOA-II Survey: Discovery of a Break and Likely Peak at a Neptune Mass ” at this page of the Astrophysical Journal website.