A step toward the development of drugs for treating breast cancer

The discovery of a Mus81-specific inhibitor will lead to the development of cancer therapy and prevention for patients who have mutations in BRACA1 and BRCA2.

Centromeres consist of DNA repeats in many eukaryotes. Non-allelic homologous recombination (HR) between them can result in gross chromosomal rearrangements (GCRs). In fission yeast, Rad51 suppresses isochromosome formation that occurs between inverted repeats in the centromere. However, how the HR enzyme prevents homology-mediated GCRs remains unclear. Here, we provide evidence that Rad51 with the aid of the Swi/Snf-type motor protein Rad54 promotes non-crossover recombination between centromere repeats to prevent isochromosome formation. Mutations in Rad51 and Rad54 epistatically increased the rates of isochromosome formation and chromosome loss. In sharp contrast, these mutations decreased gene conversion between inverted repeats in the centromere. Remarkably, analysis of recombinant DNAs revealed that rad51 and rad54 increase the proportion of crossovers. In the absence of Rad51, deletion of the structure-specific endonuclease Mus81 decreased both crossovers and isochromosomes, while the cdc27/pol32-D1 mutation, which impairs break-induced replication, did not. We propose that Rad51 and Rad54 promote non-crossover recombination between centromere repeats on the same chromatid, thereby suppressing crossover between non-allelic repeats on sister chromatids that leads to chromosomal rearrangements. Furthermore, we found that Rad51 and Rad54 are required for gene silencing in centromeres, suggesting that HR also plays a role in the structure and function of centromeres. 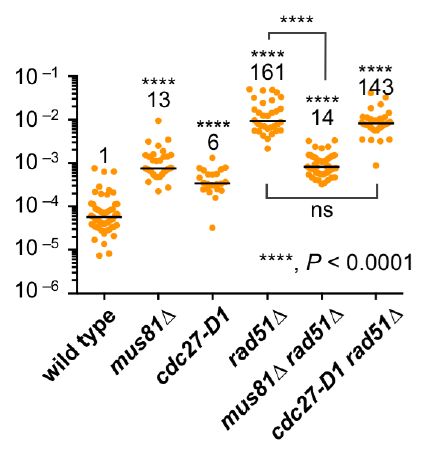 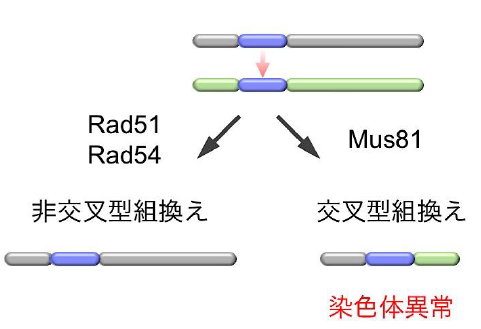 To learn more about this research, please view the full research report entitled “ Rad51 and Rad54 promote noncrossover recombination between centromere repeats on the same chromatid to prevent isochromosome formation ” at this page of the Nucleic Acids Research website.