A device to prevent side effects of tongue cancer radiation therapy developed, a world first

In Japan, about 10,000 people develop tongue cancer annually, and 3,000 ~ 4,000 of those individuals die from the disease. Being afraid of the side effects of radiation therapy, many people choose surgery for removal of the tongue, damaging the tongue's function and shape.

Radioactive therapy falls into external beam radiotherapy (EBRT) and interstitial brachytherapy (ISBT). ISBT does not cause side effects outside the surrounding area being irradiated. However, as tongue cancer arises close to the gums and mandible, ISBT may cause ulcers on the gums and osteonecrosis of the jaws, affecting physical appearance.

Although the insertion of shielding material such as lead shields between the tongue and the gum was attempted in order to avoid these side effects, such materials had a negative impact on CT scans prior to being exposed to radiation. Therefore, in Low-Dose Rate (LDR)-ISBT in which patients receive a small fraction of the radiation dose successively over the course of a week, it was impossible to consecutively insert shielding material.

A research group led by Associate Professor MURAKAMI Shumei, developed a device to prevent side effects of radiation therapy for treating tongue cancer, succeeding in using it in a clinical setting, a world first.

Although effects of radiation therapy for treating tongue cancer are not different from those of surgery, more than 90 percent of patients don’t receive radiation therapy due to fear of side effects. This group developed a modular spacer similar to a mouthpiece in order to shield against radiation-causing side effects, succeeding in reducing radiation dosage to a level that will not cause side effects on body sites close to tongue carcinoma.

This group used High-Dose Rate (HDR)-ISBT, which is used in the Faculty of Medicine at Osaka University, which can deliver a higher radiation dose in a short period of time. The use of HDR-ISBT has enabled insertion of shielding material, solving the above-mentioned issue.

It is expected that this group’s achievement will increase the possibility for patients to choose radiation therapy, which preserves tongue function and shape, without worry of side effects. In addition, it will become possible to have dental work done even immediately following radiation therapy.

Purpose
To point out the advantages and drawbacks of high-dose rate brachytherapy in the treatment of mobile tongue cancer and indicate the clinical importance of modular lead-lined spacers when applying this technique to patients.
Methods
First, all basic steps to construct the modular spacer are shown. Second, we simulate and evaluate the dose rate reduction for a wide range of spacer configurations.
Results
With increasing distance to the source absorbed doses dropped considerably. Significantly more shielding was obtained when lead was added to the spacer and this effect was most pronounced on shorter (i.e. more clinically relevant) distances to the source.
Conclusions
The modular spacer represents an important addition to the planning and treatment stages of mobile tongue cancer using HDR-ISBT. 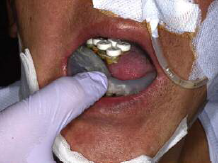 To learn more about this research, please view the full research report entitled “ Preventing Complications from High-Dose Rate Brachytherapy when Treating Mobile Tongue Cancer via the Application of a Modular Lead-Lined Spacer ” at this page of the PLOS ONE website.