As a collaboration of the National Institute of Information and Communications Technology, Hokkaido University and Osaka University, we succeeded in developing a method to measure rotational diffusion of fluorescent molecules in solution. This was accomplished by fluorescence correlation spectroscopy (FCS) using a superconductive nanowire single-photon detector (SSPD). A conventional FCS method requires two sets of photon detectors to eliminate after-pulse noises. The SSPD is free of after-pulse noises and thus enables measuring rotational diffusion with a single detector. Using this method, we now can obtain higher signal-to-noise ratios compared with conventional methods.

The capability of measuring rotational diffusion of protein molecules makes it possible to detect a very early stage of protein aggregates, which are causes of neuronal disorders, such as prion disease. Thus, an outcome of this study leads to clinical applications of the SSPD. 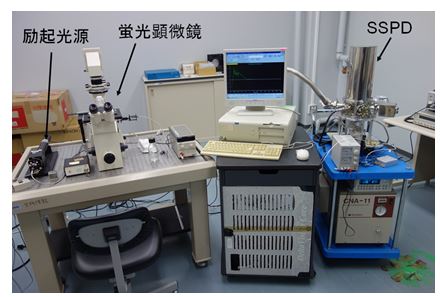 Fluorescence correlation spectroscopy (FCS) is well known method to determine the translational diffusion coefficient and the concentrations of fluorescence-tagged target molecules within a cell. By employing polarization-dependent FCS (pol-FCS) method, we can estimate the rotational diffusion coefficient, which is very sensitive to the molecular size. However, the relaxation time of biomolecular rotational diffusion is usually in the sub-microsecond range, which is comparable to the time range of the after-pulse noise of photo detectors, such as avalanche photodiodes (APDs).

NICT has developed a superconducting single-photon detector (SSPD) for quantum communication systems and succeeded in demonstrating the system detection efficiency (SDE) of 80% at 1550 nm [1]. SSPD has not only high SDE but also after-pulse-free nature, which is very promising for FCS application. NICT has developed visible-wavelength SSPD (VW-SSPD) for FCS system in collaboration with Hokkaido University and Osaka University since 2013 and achieved the SDE of 76% at 635 nm [2,3].

We succeeded in the measurement of the rotational diffusions of CdSe/CdS (core/shell) Qrod, a kind of quantum dot with a rod-like shape with the diameter and length of 7 nm and 22 nm, by using pol-FCS with VW-SSPD. The signals from rotational diffusion were never detected by single APD due to after-pulse noise. The shape of Qrod estimated from the relaxation time of observed rotational diffusion almost agreed with that estimated from transmission electron microscope (TEM) observation, suggesting that the pol-FCS with VW-SSPD is expected as a new tool for measurements of the small changes of the volume such as early stage of protein aggregates.

The pol-FCS with VW-SSPD is very effective for early diagnosis of neurodegenerative disease such as Alzheimer. Toward clinical applications of the SSPD, we will improve the performance of VW-SSPD to realize the pol-FCS system with higher sensitivity for the molecular size.

We also adopted a circular detection area with a diameter of 35 μm to achieve effective coupling with multi-mode optical fiber with a core diameter of 50 μm (Fig.2 (b)). The graded-index (GRIN) lens are attached at the end of fiber to focus the photon spot to the detection area. As a result, we have achieved the system detection efficiency (SDE) of 76% at 635 nm (Fig.2 (c)).