Group's findings improve the quality of life for child patients

A group of researchers have found that phenylbutyrate, a drug for treating a urea cycle defect, reduced the sustained intractable itch caused by an inherited liver disease primarily affecting children, Progressive Familial Intrahepatic Cholestasis (PFIC). Heretofore there has been no effective treatment for reducing the itch caused by liver diseases such as PFIC, a major factor in reducing the quality of life in patients with such conditions. This group's findings provide a means to relieve the intractable itch in children suffering from PFIC.

Background
Progressive familial intrahepatic cholestasis type 1 (PFIC1), an inherited liver disease caused by mutations in ATP8B1, progresses to severe cholestasis with a sustained intractable itch. Currently, no effective therapy has been established for PFIC1. Decreased function of the bile salt export pump (BSEP) in hepatocytes is suggested to be responsible for the severe cholestasis observed in PFIC1. We found a previously unidentified pharmacological effect of 4-phenylbutyrate (4PB) that increases the expression and function of BSEP. Here, we tested 4PB therapy in three patients with PFIC1.

Methods
The therapeutic potency of 4PB in these patients was tested by oral administration of this drug with gradually increasing dosage (200, 350, and 500 mg/kg/day) for 6 months. Biochemical, histological, and clinical data were collected.

Results
4PB therapy had no beneficial effect on the patients' liver functions, as assessed by biochemical and histological analyses, despite an increase in hepatic BSEP expression. However, therapy with 4PB at a dosage of 350 or 500 mg/kg/day significantly relieved the intractable itch. Serum levels of potential pruritogens in cholestasis were much higher than the reference ranges during the 4PB therapy.

Conclusions
4PB therapy may be a new medication for patients with intractable cholestatic pruritus and may improve quality of life for patients and their families. 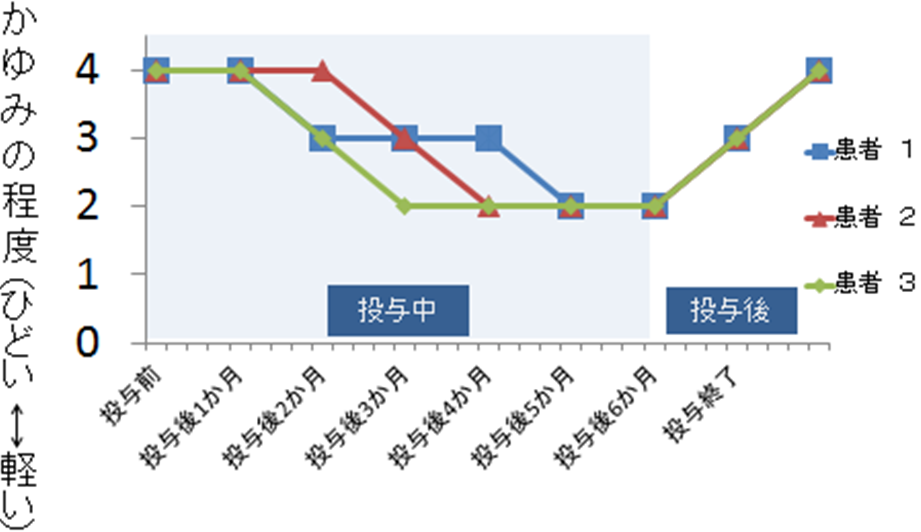 This figure shows the reduction of itchiness in 3 different child patients over a period of 6 months. As can be seen, the reduction response varied by as much as 2 months in the 3 patients; however, all eventually experienced an approximate 50% reduction.

To learn more about this research, please view the full research report entitled " Intractable itch relieved by 4-phenylbutyrate therapy in patients with progressive familial intrahepatic cholestasis type 1 " at this page of the Orphanet Journal of Rare Diseases website.