Discovery of Mechanism for preventing Ischemic Stroke from deteriorating

RANKL/RANK signaling may be a therapeutic target for treating ischemic stroke.

A group of researchers at Osaka University have discovered a mechanism that holds promise in preventing the deterioration of ischemic stroke.

Inflammation aggravates ischemic stroke; therefore, reducing inflammation is important in treating the condition. However, a sufficient effect is not achieved with conventional treatment methods targeting molecules known to cause inflammation. This group paid attention to the fact that when the Osteoprotegerin (OPG) concentration in the blood was high, the prognosis in ischemic stroke was not good. OPG acts with a receptor activator of nuclear factor-kappaB ligand (RANKL) and RANK and is related to calcification of blood vessels and osteoporosis. These molecules also act on immune cells such as macrophages, B cells, and T cells. Thus, this group started their research with the assumption that these molecules modified clinical conditions in ischemic stroke.

This group found that receptors such as RANK, RANKL, and OPG were expressed in microglia and macrophages in the acute stage of ischemic stroke. In OPG-deficient mice and mice administered RANKL, the production of inflammatory cytokine such as IL-6, TNF-a, IL-1ß, and MCP-1 was reduced and infarct volume was small. In the study using cultured cells, it was suggested that RANKL/RANK signaling could attenuate inflammation through a Toll-like receptor signaling pathway in microglia. This group has clarified that RANKL-RANK signaling demonstrated effective protective effects against ischemic stroke deterioration by inflammation. Thus, it appears RANKL/RANK signaling may be a therapeutic target for treating ischemic stroke.

Controlling inflammation by targeting known molecules has not achieved full therapeutic effect. Therefore, this group's discovery of a molecular mechanism may lead to the development of new therapeutic options for treating ischemic stroke. Moreover, RANKL-RANK signaling can suppress the expression of inflammatory cytokines from microglia. Thus, treatment drug based on RANKL may become a promising drug for ischemic stroke. 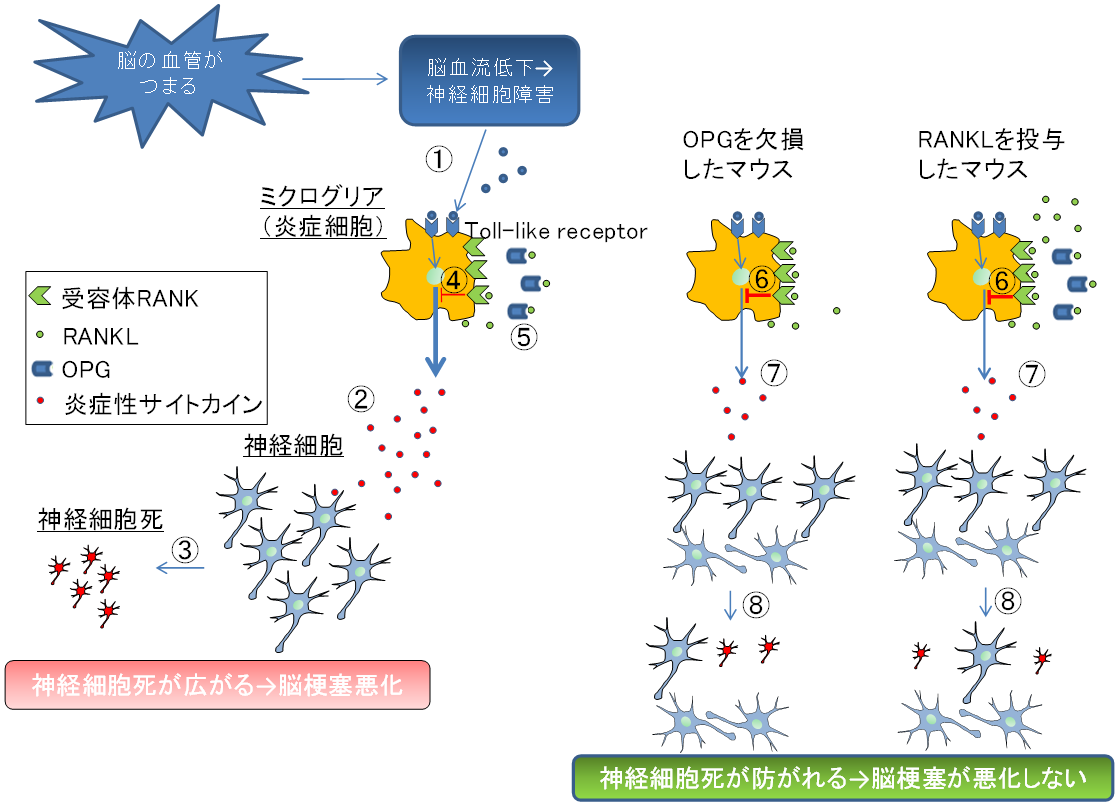 To learn more about this research, please read the full research report entitled " OPG/RANKL/RANK axis is a critical inflammatory signaling system in ischemic brain in mice " at this page of the PNAS website.