Analysis of C5 genes in 11 patients identified a heterozygous mutation, c.2654G→A, in all cases!

Under the leadership of NISHIMURA Jun-ichi (Assistant Professor, Department of Hematology and Oncology, Internal Medicine, Graduate School of Medicine, Osaka University) a group of researchers have clarified the mechanism behind the poor response to treatment with the antibody drug eculizumab (trade name: Soliris) that targets complement protein C5. Paroxysmal nocturnal hemoglobinuria (PNH) patients lack complement regulatory factors in blood cell membrane so complement activation causes intravascular hemolysis. Eculizumab targets the 5th complement protein (C5). It was developed as a drug for treating hemolysis in PNH and has shown significant inhibitory effects mainly in Europe and the U.S.

In Japan, eculizumab was approved in 2010 and administered to more than 300 patients, but in some cases, it was reported that hemolysis was not inhibited. This group analyzed C5 genes in 11 patients with poor response and identified a heterozygous mutation, c.2654G→A, in all cases. This same mutation was identified in 10 of 288 healthy subjects. Moreover, this mutation was identified in 1 in 120 Han Chinese subjects; however, it was not found in 100 British subjects or in 90 native inhabitants of Mexico.

When this group analyzed the mutant C5 protein p.Arg885His, they found the natural functioning of hemolytic activity to be normal. However, they also found that eculizumab failed to bind to any sites on the mutant C5 protein p.Arg885His. Based on such results, they were able to conclude that the poor response to eculizumab was tied to cases of C5 polymorphism, a mutation found in a small percentage of persons of Asian heritage.

Eculizumab has demonstrated remarkable effectiveness in PNH and atypical Hemolytic uremic syndrome (aHUS) in Europe and the U.S. Furthermore, eculizumab is expected to be used in treating complement-related diseases such as optic neuromyelitis and myasthenia gravis as well. In Asia, the use of eculizumab will spread to Korea and China as well. In that sense, the group's identification of this polymorphism indigenous to Asians is meaningful. Currently, many antibody drugs are used in the world in major molecular target treatment. Eculizumab has been shown to be significantly effective except for cases in which there is a resistance mutation. In such circumstances, the polymorphism found to be a cause of poor response in select population is very significant when examining the effectiveness of new antibody drugs in the future.

Background
Eculizumab is a humanized monoclonal antibody that targets complement protein C5 and inhibits terminal complement–mediated hemolysis associated with paroxysmal nocturnal hemoglobinuria (PNH). The molecular basis for the poor response to eculizumab in a small population of Japanese patients is unclear.


Methods
We assessed the sequences of the gene encoding C5 in patients with PNH who had either a good or poor response to eculizumab. We also evaluated the functional properties of C5 as it was encoded in these patients.


Results
Of 345 Japanese patients with PNH who received eculizumab, 11 patients had a poor response. All 11 had a single missense C5 heterozygous mutation, c.2654G→A, which predicts the polymorphism p.Arg885His. The prevalence of this mutation among the patients with PNH (3.2%) was similar to that among healthy Japanese persons (3.5%). This polymorphism was also identified in a Han Chinese population. A patient in Argentina of Asian ancestry who had a poor response had a very similar mutation, c.2653C→T, which predicts p.Arg885Cys. Nonmutant and mutant C5 both caused hemolysis in vitro, but only nonmutant C5 bound to and was blocked by eculizumab. In vitro hemolysis due to nonmutant and mutant C5 was completely blocked with the use of N19-8, a monoclonal antibody that binds to a different site on C5 than does eculizumab.


Conclusions
The functional capacity of C5 variants with mutations at Arg885, together with their failure to undergo blockade by eculizumab, account for the poor response to this agent in patients who carry these mutations. (Funded by Alexion Pharmaceuticals and the Ministry of Health, Labor, and Welfare of Japan.) 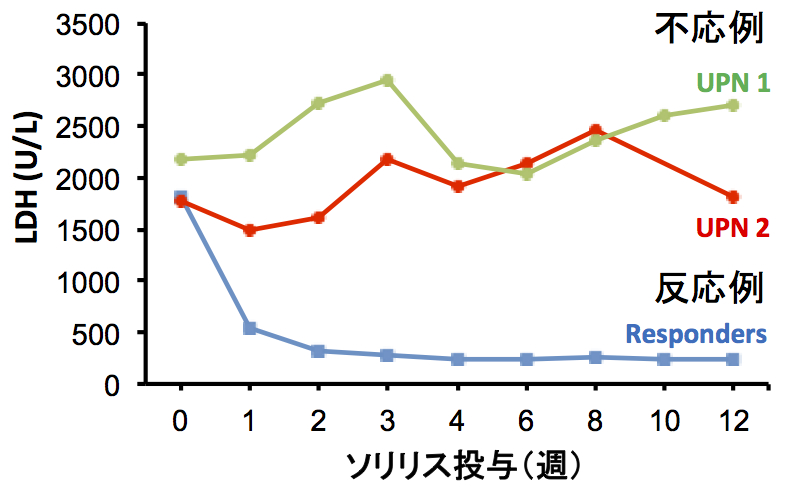 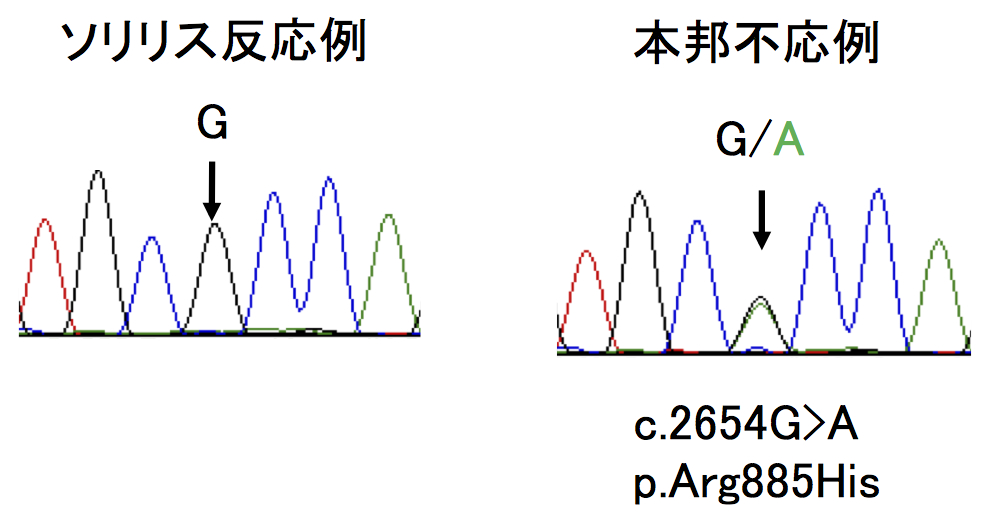 To learn more about this research, please read the full research report entitled " Genetic Variants in C5 and Poor Response to Eculizumab " at this page of the The New England Journal of Medicine website.