Pipes play an essential role in bringing water to the faucets in your home, but if one of those pipes springs a leak, damage can result. Similarly, the vascular system plays an essential role in carrying oxygen and nutrients throughout the body, but too much vascular permeability, or space between the cells lining the blood vessels, can have devastating results. Recently, researchers in Japan have shed new light on a key protein involved in vascular permeability and its impact on mortality in infectious disease.

In a new study published in PNAS, researchers led by Osaka University have demonstrated the potential of endothelial cell-specific protein Roundabout4 (Robo4) as a therapeutic target to reduce mortality resulting from severe infection. Robo4 is expressed by endothelial cells that line the blood vessels. These cells regulate vascular permeability and allow for the exchange of substances from the blood vessels into the surrounding tissue and vice versa.

“To investigate the effects of Robo4 on vascular hyperpermeability, we generated an endothelial cell-specific mouse model of conditional Robo4 overexpression,” says lead author of the study Maaya Morita. “Upon exposing these mice to lipopolysaccharide (LPS), which induces a severe immune response, the mice exhibited decreased vascular permeability and increased rates of survival.”

The researchers screened a library of drugs using a mouse endothelial cell line to identify pathways that are involved in the regulation of Robo4 and found that two competitive SMAD signaling pathways appear to regulate Robo4 expression. When the researchers treated LPS-injected mice with a drug that inhibits ALK1-SMAD signaling, they observed increased Robo4 expression, decreased vascular permeability, and reduced mortality. A reduction in mortality was also observed in mice exposed to SARS-CoV-2, the virus that causes COVID-19.

“We were pleased to find that treatment with ALK1 inhibitor increases Robo4 expression and reduces mortality in mice under sepsis and SARS-CoV-2 conditions,” says senior author Yoshiaki Okada. “Increasing Robo4 expression may represent a strategy to reduce vascular permeability and alleviate severe infections.”

The research team’s findings may aid in the development of preventative or therapeutic drugs to reduce the mortality rate of severe infectious diseases, such as COVID-19. 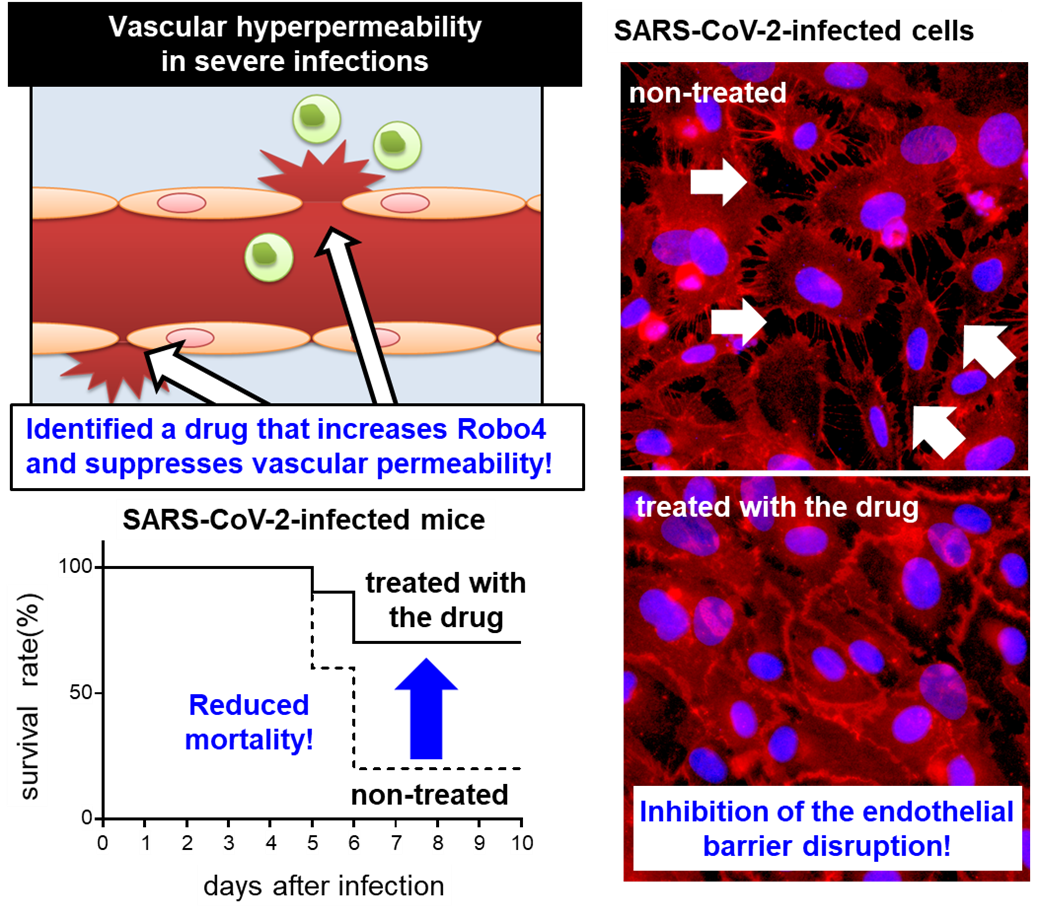 Fig. A vascular permeability inhibitor and its therapeutic effect on SARS-CoV-2 infection

Credit: Original data are from PNSA and modified by Yoshiaki Okada

The article, “Upregulation of Robo4 expression by SMAD signaling suppresses vascular permeability and mortality in endotoxemia and COVID-19 models,” was published in PNAS at DOI: https://doi.org/10.1073/pnas.2213317120.