Researchers from Osaka University and collaborating partners have used single-molecule electron-transfer kinetics to identify point mutations in mRNA. This development might facilitate treatment of glioma and other diseases

Standard medical imaging readily detects most solid brain cancers, one third of which are gliomas. Unfortunately, two complex surgeries are often necessary. But now, researchers from Japan may have devised a way to perform the initial biopsy, lab tests, and subsequent tumor removal during one surgical procedure.

During the first operation for a glioma, a surgical biopsy, the surgeon collects a sample of the suspect tissue. A lab then runs tests on the sample to diagnose the type of cancer (i.e., whether it is benign or not) and to determine what type of malignancy. Depending on the resulting treatment plan, you might then need a second surgical operation. However, in a study recently published in Chem, researchers from Osaka University and collaborating partners have used an advanced DNA-based fluorescence technique that could help bring real-time cancer diagnostics to medical practice. This study answers long-standing basic science questions and could open up new directions in medical care.

Photo-induced electron transfer is the basis of many DNA-based biosensors. Researchers’ understanding of the kinetics (i.e., rate) of this process is based on the average behavior of many molecules, known as ensemble measurements. “Such measurements obscure the single-molecule behavior that's foundational to the kinetics of electron transfer,” explains Shuya Fan, lead author, “but our research clears this obscurity. We used fluorescence correlation spectroscopy to measure transient fluorescence patterns—fluorescence blinking—and in so doing uncovered single-molecule chemistry that will advance diagnostic applications.”

The researchers measured the relationship between the kinetics of electron transfer in single molecules of DNA with the distance and sequence of the DNA. The basis of their work was to photo-irradiate a fluorescent molecule, which initiated electron transfer from the DNA. A mathematical technique known as autocorrelation analysis indicated that a greater distance between fluorescent molecule and an electron donor (a hole acceptor) corresponded to a decreased speed of fluorescence blinking.

“Unexpectedly, the electron transfer rate for any given DNA sequence was a unique range of values—a pattern, rather than a precise value,” says Kiyohiko Kawai, senior author. "We used the corresponding fluorescence blinking to detect an mRNA glioma point mutation in cultured cells.”

An immediate extension of this research is an increased understanding of how point mutations spread in the body. Furthermore, the researchers' approach is compatible with real-time glioma diagnosis during a surgical biopsy. Thus, targeted cancer therapy without the need for multiple surgeries is an additional realistic extension of this research development. Perhaps based on this research, cancer surgery will be simpler, faster, and more effective than today. 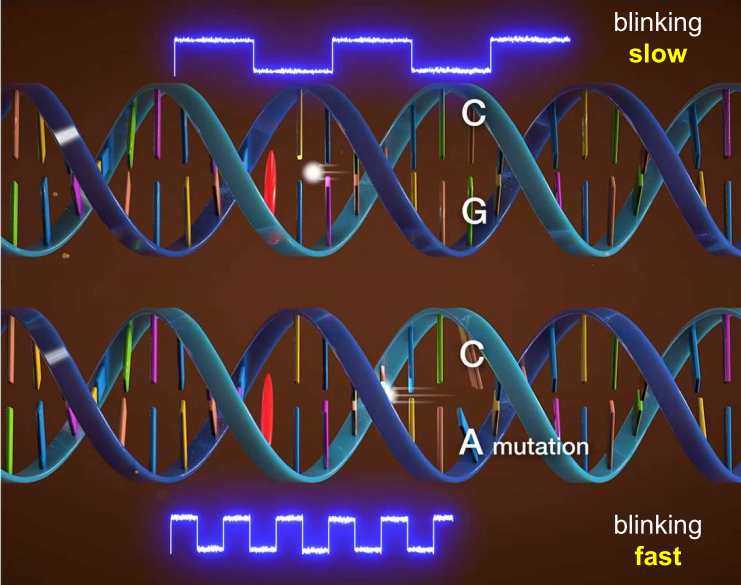 An electron migrates through the DNA and the DNA/RNA hybrid duplex. In this study, the electron loss center (hole) moved through the duplex; and the movie represents the movement of the hole (white sphere). Because the electron transfer rate depends on the nucleic acid sequence, one can read the sequence information by measuring the electron transfer kinetics. In this study, we focused on detecting the R132H c.395 G>A mutation, a point mutation in IDH1 mRNA that is common in adult grade II and III gliomas. DNA probes designed to hybridize with IDH1 mRNA in cells began to blink upon hybridization, which facilitated measurement of the electron transfer kinetics. By measuring the OFF-time during blinking, we accessed the dynamics of electron transfer. In the probe/mutant duplex, blinking occurred faster than in the probe/wild-type duplex. We observed fast blinking in pathological sections of cell blocks that overexpressed IDH1 mutant RNA, whereas we observed little blinking in cell blocks that expressed only wild-type IDH1. This would allow us to identify pathological specimens obtained during surgery, as presented as a future prospect in the last part of this movie. By using the injected hole as a pulse of sound—analogous to the ping of an active sonar system—and measuring the time required for the hole to return, one can read information on the nucleic acid sequence that is associated with the fluorescent molecule.

CC BY, 2022, Shunya Fan et al. Electron transfer kinetics through nucleic acids untangled by single-molecular fluorescence blinking. Chem, Credit must be given to the creator.

The article, "Electron-transfer kinetics through nucleic acids untangled by single-molecular fluorescence blinking," was published in Chem at DOI: https://doi.org/10.1016/j.chempr.2022.07.025.

Introduction to the research of KAWAI Kiyohiko (link in Japanese)