Terahertz accelerates beyond 5G towards 6G

A team of researchers at Osaka University, together with Rohm Co., Ltd., has employed 300-GHz band terahertz waves as an information carrier that allows for wireless communications of 8K ultrahigh definition (UHD) video with a data rate of 48 Gbit/s under the JST CREST project “Development of terahertz integrated technology platform through fusion of resonant tunneling diodes and photonic crystals."

The next-generation 6G mobile communication standard beyond the present 5G system is expected to transmit 8K and other UHD videos with low latency and low power consumption. Since the data rate of UHD video is very high, however, it is necessary to compress the data when being transmitted wirelessly using microwaves or millimeter waves, which results in delays and increased power consumption. Thus, the development of a technology for uncompressed wireless transmission of UHD video is required.

“In general, the higher the frequency, the greater the capacity to transmit information, with terahertz waves having a higher frequency than microwaves and millimeter waves (Fig. 1). We focused on terahertz waves in the 300-GHz band,” explains Assistant Professor Julian Webber.

The researchers configured a two-channel terahertz transmitter (Tx) by modulating the output of a laser pair with wavelengths in the 1.55-micron band, which was set so that the frequency difference was in the 300-GHz band, with an 8K video signal source using an intensity modulator and converting it into terahertz waves using an ultrafast photodiode (PD) (Fig. 2).

“Our achievement demonstrates the usefulness of terahertz waves and is expected to accelerate research and development activities for the realization of Beyond 5G and eventually 6G. Such uncompressed wireless transmission technology for UHD video will enhance the quality of telemedicine and telework, which are directly related to social issues, and will lead to the advancement of physical-cyber fusion by utilizing the big data of UHD video.” 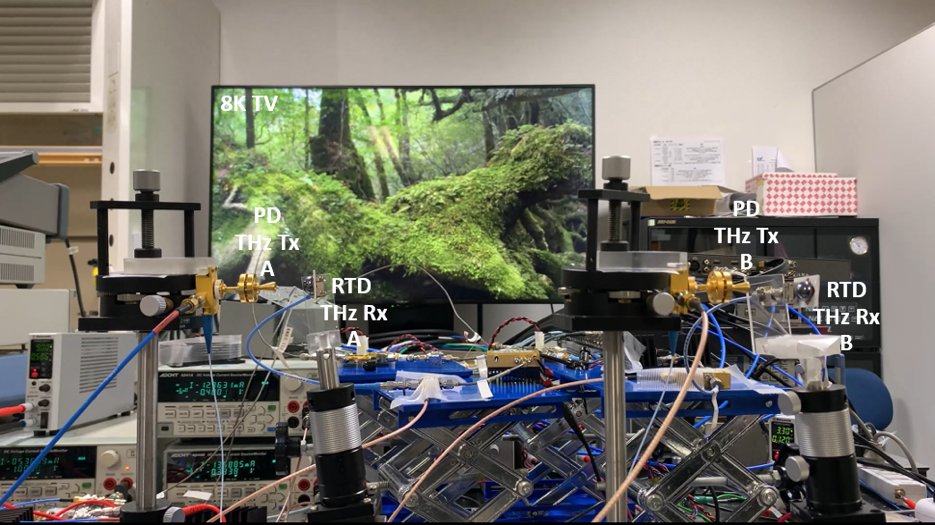