“My robot is a softie”: physical texture influences judgments of robot personality

Impressions of a robot’s personality can be influenced by the way it looks, sounds, and feels. But now, researchers from Japan have found specific causal relationships between impressions of robot personality and body texture.

In a study published in Advanced Robotics, researchers from Osaka University and Kanazawa University have revealed that a robot’s physical texture interacts with elements of its appearance in a way that influences impressions of its personality.

Body texture, such as softness or elasticity, is an important consideration in the design of robots meant for interactive functions. In addition, appearance can modulate whether a person anticipates a robot to be friendly, likable, or capable, among other characteristics.

However, the ways in which people perceive the physical texture and the personality of robots have only been examined independently. As a result, the relationships between these two factors is unclear, something the researchers aimed to address.

“The mechanisms of impression formation should be quantitatively and systematically investigated,” says lead author of the study Naoki Umeda. “Because various factors contribute to personality impression, we wanted to investigate how specific robot body properties promote or deteriorate specific kinds of impressions.”

To do this, the researchers asked adult participants to view, touch, and evaluate six different inactive robots that were humanoid to varying degrees. The participants were asked to touch the arm of the robots. For each robot, four fake arms had been constructed; these were made of silicone rubber and prepared in such a way that their elasticity varied, thus providing differing touch sensations. The causal relationships between the physical textures of the robot arms and the participant perceptions were then evaluated.

“The results confirmed our expectations,” explains Hisashi Ishihara, senior author. “We found that the impressions of the personalities of the robots varied according to the texture of the robot arms, and that there were specific relationships among certain parameters.”

The researchers also found that the first impressions of the robots, made before the participants touched them, could modulate one of the effects.

“We found that the impression of likability was strengthened when the participant anticipated that the robot would engage in peaceful emotional verbal communication. This suggests that both first impressions and touch sensations are important considerations for social robot designers focused on perceived robot personality,” says Ishihara.

Given that many robots are designed for physical interaction with humans—for instance those used in therapy or clinical settings—the texture of the robot body is an important consideration. A thorough understanding of the physical factors that influence user impressions of robots will enable researchers to design robots that optimize user comfort. This is especially important for robots employed for advanced communication, because user comfort will influence the quality of communication, and thus the utility of the robotic system. 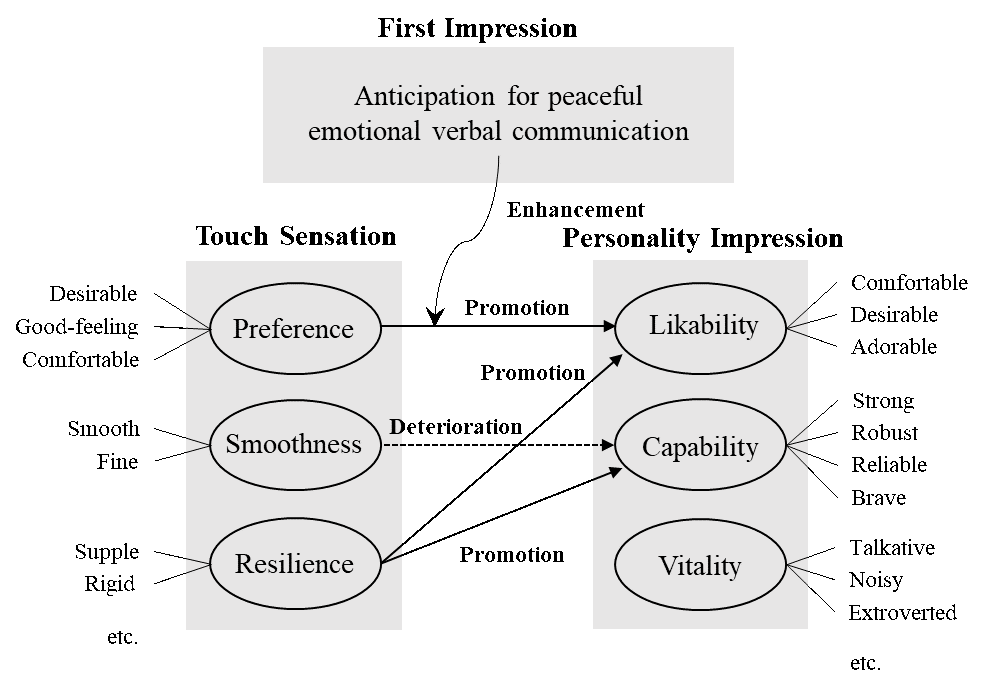