The intestinal microbial ecosystem includes diverse species of bacteria. These bacteria can produce bioactive metabolites that directly affect the host’s immune system. An imbalance of microbial metabolites has been implicated in the pathogenesis of chronic disorders, including ulcerative colitis. In a recent article published in PNAS, a team led by researchers at Osaka University uncovered a molecular mechanism by which aggravation of colitis is inhibited through regulation of intestinal levels of a microbial metabolite, adenosine triphosphate (ATP), that affects certain immune cells and facilitates inflammatory responses.

Because ATP secreted by bacteria in the intestine, known as luminal ATP, influences the host immune system, the amount of luminal ATP is stringently controlled to prevent intestinal inflammation. However, the specific mechanism for tuning luminal ATP levels in the colon is not completely understood. In this study, the research group investigated the role of an ATP-hydrolyzing enzyme, called ectonucleoside triphosphate diphosphohydrolase 8 (E-NTPD8), in the colon.

Enzymes belonging to the E-NTPD family can break down ATP molecules into adenosine diphosphate or adenosine monophosphate, which is referred to as ATP hydrolysis, to block inappropriate immune responses. The researchers performed cell culture experiments and found that E-NTPD8 can hydrolyze ATP added to the cell culture medium. To investigate the specific impact of this activity in vivo, they generated a model system with mice lacking the gene encoding the E-NTPD8 protein.

“In the knockout mice, E-NTPD8 expression was completely abolished in colon epithelial cells, whereas wild type mice had high expression of this protein in these cells,” says senior author Kiyoshi Takeda. “There were much higher levels of luminal ATP in the colons of the knockout mice as well.”

Furthermore, after chemically inducing colitis, the team observed more severe symptoms in the E-NTPD8 knockout mice. These animals also had higher numbers of Th17 cells and neutrophils in the colon, which are types of immune cells. Treating these mice with a particular antibody to deplete the neutrophils markedly improved severe colitis symptoms, while depletion of other various immune cell types did not.

“Additional mechanistic experiments showed us that a molecular interaction between ATP and a receptor called P2X4R is critical here,” explains senior author Hisako Kayama. “Mice lacking both E-NTPD8 and P2X4R had significant disease improvement, as well as a reduced number of neutrophils compared with normal mice.”

The team determined that luminal ATP could promote a process called glycolysis through P2X4R in neutrophils, which prolongs their survival. This ultimately leads to increased inflammation caused by accumulation of neutrophils within the colon.

“Our data suggest that controlling luminal ATP-P2X4R signaling and expression levels of E-NTPD8 could be utilized for therapeutic intervention in human ulcerative colitis,” explains Kayama.

Inflammatory bowel diseases like ulcerative colitis and Crohn’s disease negatively impact the lives of millions of people worldwide. The impactful data presented by this group provide a promising direction for the development of new therapeutic methods for these disorders.

“This study identifies a mechanism for reducing the number of neutrophils in the colon and preventing severe colitis. We hope that our research results will lead to elucidation of the etiology of ulcerative colitis and the development of new therapies. We would like to express our deepest gratitude to all colleagues and the patients who provided specimens,” said Kayama. 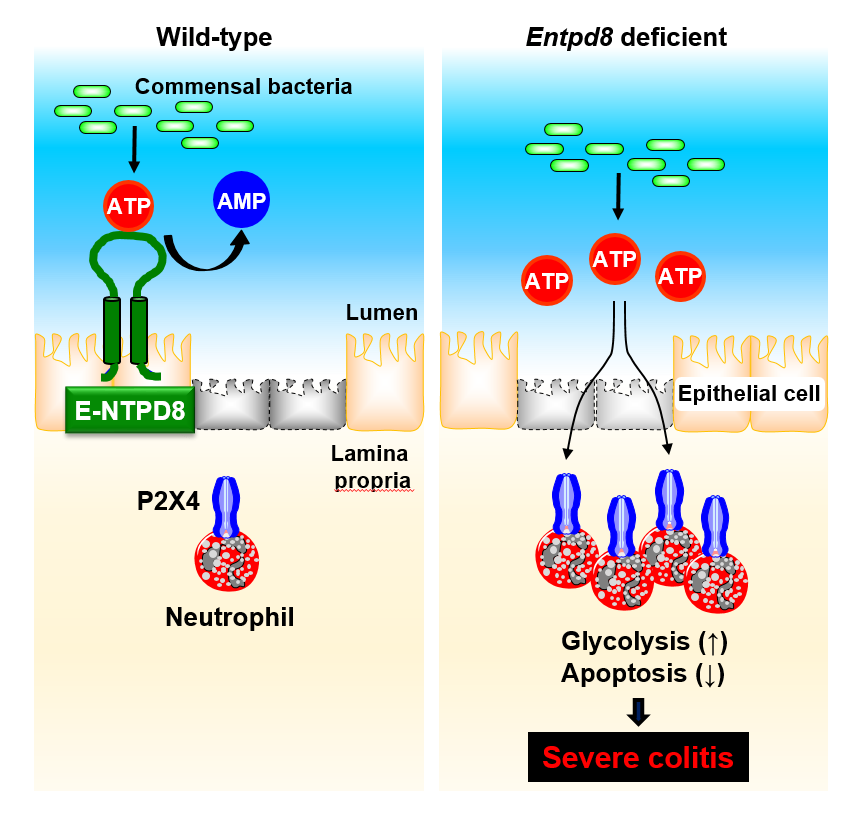 E-NTPD8 in colonic epithelial cells maintains gut homeostasis through the hydrolysis of luminal ATP produced by commensal bacteria (left). An increased level of luminal ATP caused by a lack of E-NTPD8 modulates neutrophil physiology, such as prolonged survival through P2X4-mediated promotion of glycolysis. This can then aggravate colitis symptoms (right).

The article, “The ATP-hydrolyzing ectoenzyme E-NTPD8 attenuates colitis through modulation of P2X4 receptor-dependent metabolism in myeloid cells,” was published in PNAS at DOI: https://doi.org/10.1073/pnas.2100594118.