Cold planets exist throughout our Galaxy, even in the Galactic bulge

Although thousands of planets have been discovered in the Milky Way, most reside less than a few thousand light years from Earth. Yet our Galaxy is more than 100,000 light years across, making it difficult to investigate the Galactic distribution of planets. But now, a research team has found a way to overcome this hurdle.

In a study published in The Astrophysical Journal Letters, researchers led by Osaka University and NASA have used a combination of observations and modeling to determine how the planet-hosting probability varies with the distance from the Galactic center.

The observations were based on a phenomenon called gravitational microlensing, whereby objects such as planets act as lenses, bending and magnifying the light from distant stars. This effect can be used to detect cold planets similar to Jupiter and Neptune throughout the Milky Way, from the Galactic disk to the Galactic bulge—the central region of our Galaxy.

“Gravitational microlensing currently provides the only way to investigate the distribution of planets in the Milky Way,” says Daisuke Suzuki, co-author of the study. “But until now, little is known mainly because of the difficulty in measuring the distance to planets that are more than 10,000 light years from the Sun.”

The results show that the planetary distribution is not strongly dependent on the distance from the Galactic center. Instead, cold planets orbiting far from their stars seem to exist universally in the Milky Way. This includes the Galactic bulge, which has a very different environment to the solar neighborhood, and where the presence of planets has long been uncertain.

“Stars in the bulge region are older and are located much closer to each other than stars in the solar neighborhood,” explains lead author of the study Naoki Koshimoto. “Our finding that planets reside in both these stellar environments could lead to an improved understanding of how planets form and the history of planet formation in the Milky Way.”

According to the researchers, the next step should be to combine these results with measurements of microlens parallax or lens brightness—two other important quantities associated with planetary microlensing. 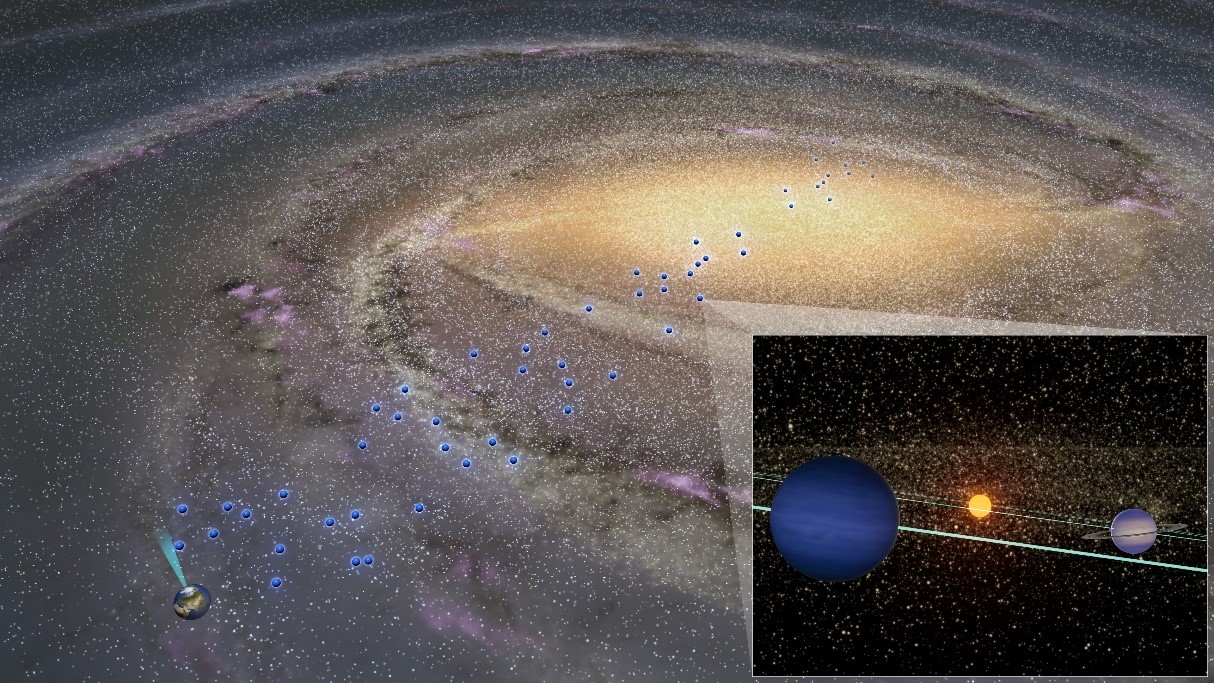 An artist’s conception of cold planet distribution throughout the Milky Way. For comparison, the cyan cone is the Kepler transit survey field. The inset shows an artistic conception of a planetary system in the Galactic bulge.

The article, “No large dependence of planet frequency on Galactocentric distance,” was published in The Astrophysical Journal Letters at DOI: https://doi.org/10.3847/2041-8213/ac17ec.