Hepatitis C virus (HCV) may cause chronic infection to the liver, which can result in irreversible liver damage and liver cancer. How HCV manages to evade the immune system to infect the host chronically is not entirely understood. In a new study, researchers from Osaka University discovered a novel molecular mechanism by which HCV interferes with the host’s immune system to cause chronic liver infection. These findings may help establish a novel therapy against chronic HCV infection.

HCV infection becomes chronic in approximately 80% of patients. Antiviral therapies exist and can improve the patients’ conditions, but liver disease, and consequentially the formation of liver cancer, is not sufficiently mitigated by this therapeutic approach. It is thus important to understand how HCV manages to evade the host’s immune system in the first place to become chronically established, to help researchers develop novel and better therapies against the disease.

At the molecular level, HCV produces a single protein in infected cells that is then split into ten individual proteins. One of these proteins is the HCV core protein, which for stable function requires the action of one of the host cell’s proteins, the signal peptide peptidase (SPP). Researchers know that blocking SPP results in the HCV core protein being broken down, and thus suppresses the production of infectious HCV particles. However, the ways in which the core protein affects the host’s immune system have remained unclear – until now.

“Immunoevasins, which are proteins that help viruses evade the host’s immune system, exist in a number of viruses, such as Epstein–Barr virus, ebolavirus, cytomegalovirus, and hepatitis C virus,” says first author of the study Junki Hirano. “When cells are infected with a virus, they degrade viral proteins and load the fragments onto so-called MHC class I proteins, so that specific immune cells can sense the ongoing viral infection from outside the infected cells and eliminate them. In this study, we wanted to understand the connection between signal peptide peptidase and MHC class I proteins in the setting of hepatitis C infection.”

To achieve their goal, the researchers first employed a human liver cell line to understand how the HCV core protein, SPP and MHC class I proteins interact. They found that SPP is required for the production of MHC class I molecules to enable a proper immune response in liver cells. However, in the presence of the HCV core protein, SPP cannot properly interact with MHC class I proteins, which are then degraded via the actions of another protein, HMG-CoA reductase degradation 1 homolog (HRD1). As a result, cellular presentation of viral particles to immune cells is impaired and the infection continues to become chronic.

The researchers then asked if this might be a common mechanism to evade the host’s immune system in other virus infections. They turned to human cytomegalovirus (HCMV), a virus known to also damage the liver in addition to other organs, such as the eyes and the esophagus. They found that a protein produced by HCMV, US2 protein, is structurally similar to the HCV core protein and similarly induces degradation of MHC class I proteins by targeting SPP.

“These are striking results that show how HCV and HCMV may cause chronic infection by targeting signal peptide peptidase to achieve immune evasion,” says lead author of the study Professor Toru Okamoto. “Our study revealed a novel molecular mechanism by which these viruses target an important component of the human immune system, MHC class I molecules, to interfere with the proper immune response. These findings could help with development of novel therapies against persistent infection caused by these viruses.” 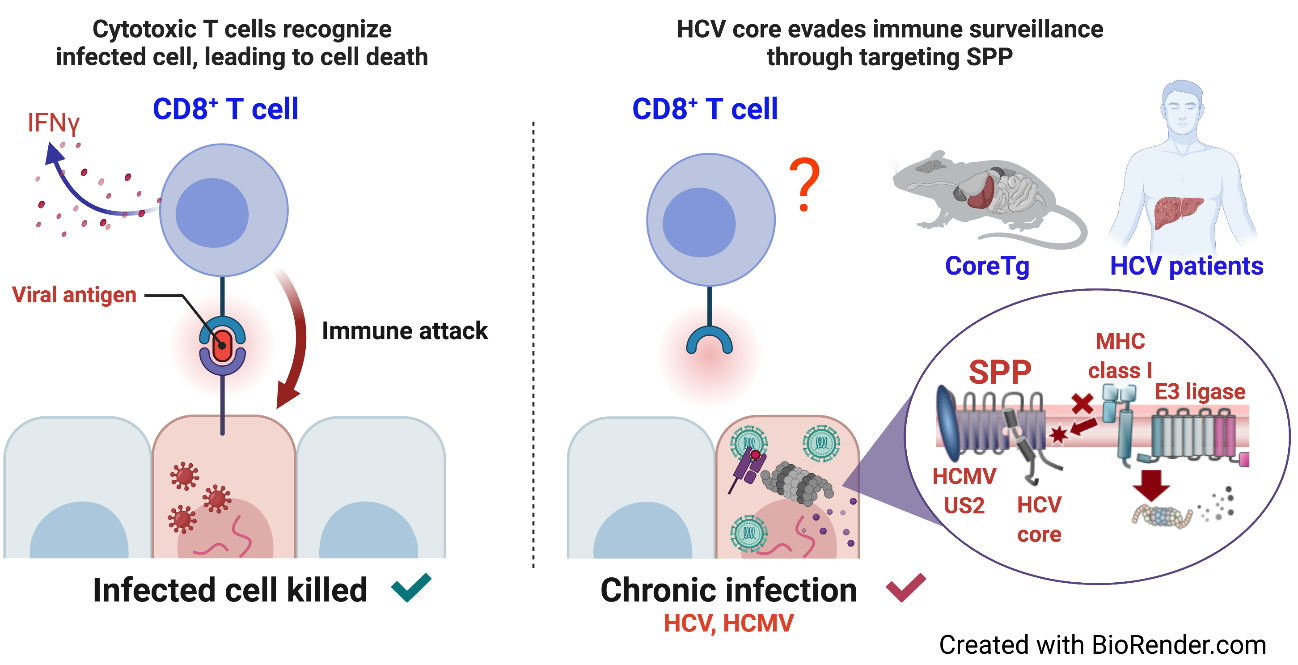