Expressing some doubts about android faces

Researchers at Osaka University study the expressiveness of android faces using motion capture cameras and identify ways in which they still lack the complexity of real human reactions, which may help guide future robot design

Researchers from the Graduate School of Engineering and Symbiotic Intelligent Systems Research Center at Osaka University used motion capture cameras to compare the expressions of android and human faces. They found that the mechanical facial movements of the robots, especially in the upper regions, did not fully reproduce the curved flow lines seen in the faces of actual people. This research may lead to more lifelike and expressive artificial faces.

The field of robotics has advanced a great deal over the past decades. However, while current androids can appear very humanlike at first, their active facial expressions may still be unnatural and slightly unsettling to us. The exact reasons for this effect have been difficult to pinpoint. Now, a research team at Osaka University has used motion capture technology to monitor the facial expressions of five android faces and compared the results with actual human facial expressions. This was accomplished with six infrared cameras that monitored reflection markers at 120 frames per second and allowed the motions to be represented as three-dimensional displacement vectors.

“Advanced artificial systems can be difficult to design because the numerous components have complex interactions with each other. The appearance of an android face can experience surface deformations that are hard to control,” study first author Hisashi Ishihara says. These deformations can be due to interactions between components such as the soft skin sheet and the skull-shaped structure, as well as the mechanical actuators.

The first difference the team found between the androids and adult males was in their flow lines, especially the eye and forehead areas. These lines tended to be almost straight for the androids but were curved for the human adult males. Another major difference was with the skin surface undulation patterns in the upper part of the face.

“Redesigning the face of androids so that the skin flow pattern resembles that of humans may reduce the discomfort induced by the androids and improve their emotional communication performance,” senior author Minoru Asada says. “Future work may help give the android faces the same level of expressiveness as humans have. Each robot may even have its own individual “personality” that will help people feel more comfortable.” 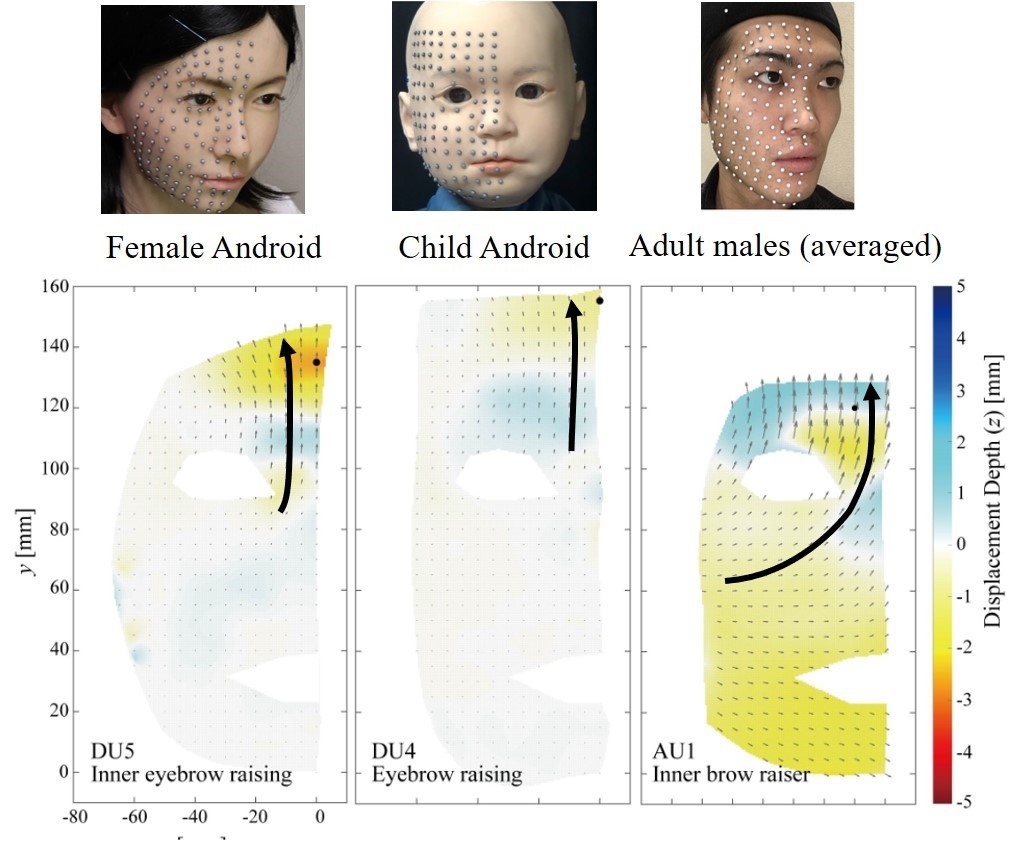 Example of the facial flow lines when two androids (left and middle) and adult males (right) lifted their inner eyebrow. (credit: Ishihara, Iwanaga, and Asada, Comparison between the Facial Flow Lines of Androids and Humans, Frontiers in Robotics and AI, 2021)