A group of researchers from Osaka University has found that Kampo* TJ-35 (Shigyakusan), which is included in The Japanese Pharmacopoeia, had a suppressive effect on autophagic activity, clearing its mechanisms.

The human body is made up of billions of cells. When cells experience nutrient starvation, they start to degrade themselves through a process called autophagy. During autophagy, membrane structures are generated and enwrap their targets, such as cytosolic proteins and organelles, and deliver them to the lysosome for degradation.

Autophagy also functions to promote homeostasis; however, once autophagy is compromised or enhanced, various disorders, such as cancer and neurodegeneration, develop. Although drugs to regulate autophagy are being developed to overcome autophagy-associated diseases, safe and effective drugs have not been developed.

Kampo has been used for treating various diseases and health control; however, the underlying mechanisms of Kampo’s effects on a variety of diseases remain unclear. In this study, the researchers conducted a high-throughput screening of 128 kinds of Kampo to evaluate their effects on autophagy, revealing a suppressive effect of TJ-35 on autophagic activity. When cytosolic Ca2+ concentration was increased in response to nutrient starvation, TJ-35 suppressed this increase. That is, TJ-35 prevented the starvation-induced Ca2+ increase, thereby suppressing induction of autophagy.

Under nutrient-rich conditions, mTORC1 is active and TFEB is phosphorylated and retained in the cytoplasm, whereas under starvation, dephosphorylated TFEB translocates to the nucleus and up-regulates transcription of autophagy-related genes.

TJ-35 is prescribed for various inflammatory diseases, such as cholecystitis, pancreatitis, and gastritis. Although definitive correlation of these diseases with autophagy is still to be determined, it is known that acute pancreatitis is relieved by suppression of autophagy.

This study suggested the possible suppressive effect of TJ-35 on autophagic activity. Further analysis of medical properties of TJ-35 will lead to the establishment of therapies for autophagy-associated diseases.

Since Kampo, including TJ-35, has been authorized as prescription drugs and their safety is ensured, it is anticipated that it will also be used as a tool of drug repositioning, a scientific strategy of investigating existing drugs for additional clinical indications, for treating diseases associated with autophagy, such as cancer. 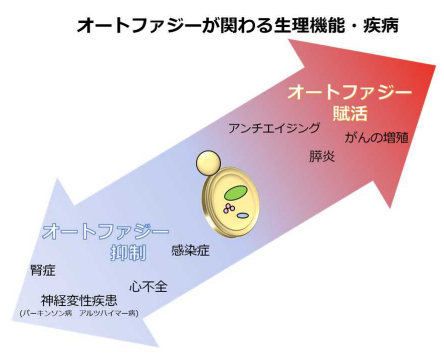 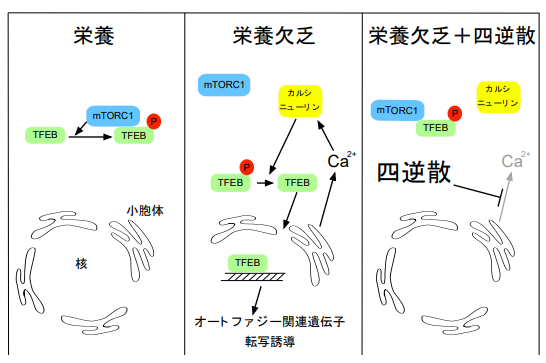 The article, “Starvation-induced autophagy via calcium-dependent TFEB dephosphorylation is suppressed by Shigyakusan” was published in PLOS ONE at https://doi.org/10.1371/journal.pone.0230156.