A team of researchers from Hiroshima University, Osaka University, Kyoto University, Chiba University, and the Japan Synchrotron Radiation Research Institute (JASRI) has developed semiconducting polymers in which fluorine atoms are introduced into their polymer electronic structures.

Using these polymers, they created Organic Photovoltaic cells, or OPVs. In these OPVs, power conversion efficiency (PCE, or the efficiency of converting the sun's energy to electricity) increased due to reduced voltage losses. They also clarified the effect of the fluorine substitution position on the polymer electronic structure on the polymer's properties and photovoltaic properties.

In addition, OPVs are lightweight, can realize high conversion efficiency at room temperatures, and exhibit high transparency, so they have been recently receiving more attention as an energy source for Internet of Things (IoT) sensors and mobile/wearable electric power sources, which are difficult to be realized by conventional inorganic photovoltaic cells. However, it is essential to develop new semiconducting polymers that can realize high PCE.

In an OPV cell, sunlight is absorbed in the photoactive layers composed of donor and acceptor semiconducting organic materials to generate photocurrents. The donor material donates electrons and mainly transports holes (positive charge carriers), while the acceptor material withdraws electrons (negative charge carriers) and mainly transports electrons. A photovoltaic is generated when the holes and electrons move to the corresponding electrodes. However, when charge recombination, in which positive charge and negative charge combine, occurs in solar cells, charge is eliminated. This wields harmful effects on current and voltage, decreasing PCE. 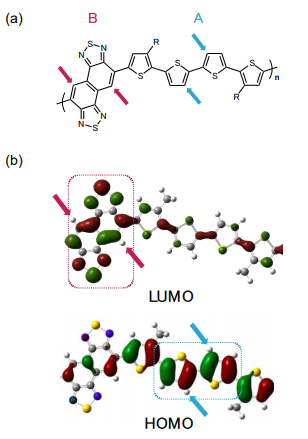 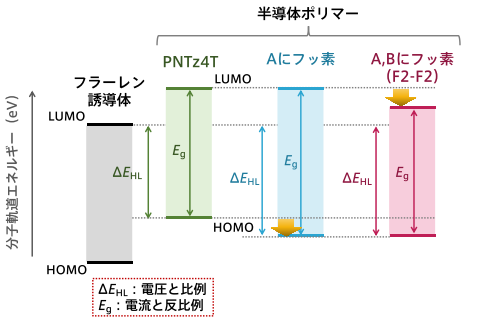