The engraved structures are considered equivalent to the laser-induced periodic surface structures (LIPSS) produced by the irradiation of a femtosecond (fs)-pulsed laser in the near-infrared (NIR) region. The minimum period of ~1/25 of the wavelength, the resolution beyond the conventional limits of diffraction, in the present case of THz-FEL is markedly much smaller than those reported so far.

LIPSS was studied using only a NIR fs-laser, and high spatial frequency LIPSS (HSFL) with periods smaller than half of the wavelength were fabricated. However, the wavelength dependence of LIPSS remains unclear because most studies on LIPSS have been performed only in narrow wavelength regions.

In this study, using FIR THz-FEL, the researchers systematically formed and controlled a fine structure of ~1/25 of the wavelength on the surfaces of single-crystal Si wafers. The ratio of the minimum LIPSS period observed in this study relative to the excitation wavelength was ~1/25, which is markedly smaller, by one order of magnitude, than those reported so far by use of fs-lasers. Using FIR light that is approximately 100 times longer than that of NIR fs-lasers, they were able to investigate finer time-resolved changes in morphology and material properties in experiments.

Exploring a new realm of material processing with lasers based on this group’s results will make a great contribution to the improvement of material properties and device development skills. 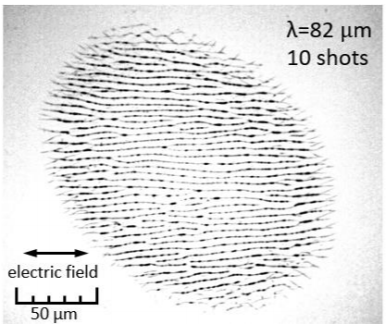