Ultra-short pulse lasers can heat matter from several million degrees to several thousand degrees in a subpicosecond (10 -12 ) seconds. Because the heating time is very short, matter transforms into plasma while maintaining its solid density, becoming a high energy-density state as high as in the sun’s interior. Such extremely high speed heating is called “isochoric heating,” allowing for the generation of a non-equilibrium state of plasma with known density.

Such plasma is used as a vital test bed for studies of the equation of state, thermal conductivity, research on the atomic process such as the x-ray absorption process, as well as basic research on laser nuclear fusion, and is anticipated as a compact X-ray source and a new quantum resource, such as a neutron ray resource.

With 2D narrow-band x-ray imaging and x-ray spectroscopy, this group measured emission from a thin titanium foil heated by a high intensity laser. Using a 4.51 keV Ti Kα x-ray, they visualized a significantly ionized area of the solid density plasma, confirming the creation of missing Kα.

Thermal diffusion from the hot preplasma achieved a high ionization state in solid titanium. The preplasma was ionized to high charge states (>~17), shifting Kα, consequently, deviating from the measuring range of the 2D imaging. It means that the inside of the solid was heated to the temperature where the number of valence increased to 16 or more in titanium.

The team studied high-intensity laser-matter interaction using the particle-in-cell (PIC) simulation incorporating a dynamic ionization model, confirming that transition to a high temperature state, in which high ionization occurred, was achieved in a few picoseconds after the pulse ends. This result showed that laser isochoric heating was achieved by thermal diffusion from the low-density hot preplasma, a world first.

This measurement method and the clarification of the laser isochoric heating mechanism will further develop high energy density science such as a laser-driven high brightness X-ray source. The results of this study will provide guidelines for controlling energy states of metal by laser, leading to the development of new quantum beam sources such as high brightness X-ray sources, the applications of which are highly anticipated. 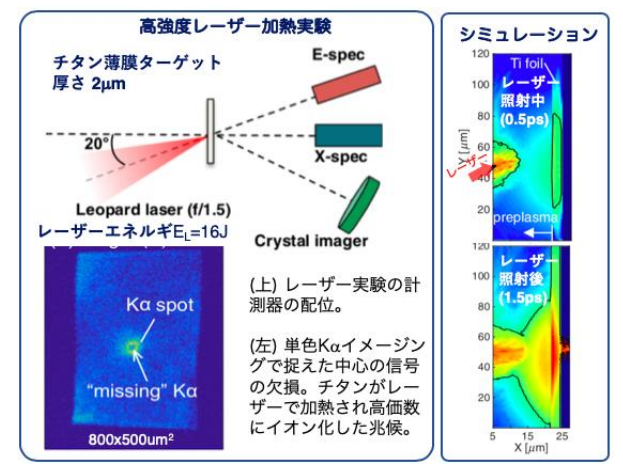