A group of researchers from The University of Tokyo, Tokyo Institute of Technology, in cooperation with National Institute of Advanced Industrial Science and Technology, RIKEN, and Osaka University, observed a “weak” topological insulator (WTI) phase in β-phase of quasi-one-dimensional (1D) bismuth iodide Bi 4 I 4 (β-Bi 4 I 4 ), a world first. They also verified that the emergence of spin currents could be controlled through a topological phase transition from a nontrivial WTI to a normal insulator at roughly room temperature.

In addition to metals, semiconductors, and insulators, topological insulators, a new exotic type of material, are drawing attention. In topological insulators, the bulk is insulated like a normal insulator, but its surface shows conductivity like a metal. While the charge of electrons are used in electronics, both charge and spin of electrons are used in spintronics, which is next-generation energy saving technology. Spintronics can be realized by spin current, a flow of spins in a straight path like a laser light (highly directional) at a high speed (ultrafast) without loss of information (dissipationless).

An electron has charge and spin angular momentum. While an electric current is a flow of electric charge, spin current is a flow of spin angular momentum of electrons. It is expected that use of the pure spin current, which efficiently transmits spin information without generating Joule heat, will realize highly efficient spin information transmission, enhancing the performance of spin devices. It was theoretically predicted that WTIs would realize it, but they had not yet been discovered.

In this study, the researchers directly observed the electronic state on the surface of a WTI in β-Bi 4 I 4 by nano ARPES (angle-resolved photoemission spectroscopy). They found that the electronic state on the top surface was the same as that of a normal insulator but that topological surface states (TSSs) were only on particular side surfaces. Highly directional spin current was generated over the side surface of the 3D crystal.

The group confirmed that ultrafast spin current (because an electron has no mass), which is highly directional and protected against backscattering, was generated on the side surface of the WTI. In addition, they verified that a crystal transition from the β-phase to the α-phase drove a topological phase transition from a nontrivial WTI to a normal insulator at roughly room temperature, controlling the emergence of robust spin currents.

Phase change technology, technology to change a crystalline state to an amorphous state by heating with a laser beam and keep the amorphous state by rapid cooling, has been used for reversible writing on Digital Versatile Discs (DVDs). This discovery shows the feasibility of disc media that achieve writing of information by using a topological phase on the same principle and becomes a foundation of technology for controlling Spin Transfer Torque Random Access Memory (STT-RAM), which uses a spin polarized current.

The major breakthroughs in understanding of topological materials over the past decade were all triggered by the discovery of the Z 2 -type topological insulator—a type of material that is insulating in its interior but allows electron flow on its surface. In three dimensions, a topological insulator is classified as either ‘strong’ or ‘weak’, and experimental confirmations of the strong topological insulator rapidly followed theoretical predictions. By contrast, the weak topological insulator (WTI) has so far eluded experimental verification, because the topological surface states emerge only on particular side surfaces, which are typically undetectable in real three-dimensional crystals. Here we provide experimental evidence for the WTI state in a bismuth iodide, β-Bi 4 I 4 . Notably, the crystal has naturally cleavable top and side planes—stacked via van der Waals forces—which have long been desirable for the experimental realization of the WTI state. As a definitive signature of this state, we find a quasi-one-dimensional Dirac topological surface state at the side surface (the (100) plane), while the top surface (the (001) plane) is topologically dark with an absence of topological surface states. We also find that a crystal transition from the β-phase to the α-phase drives a topological phase transition from a nontrivial WTI to a normal insulator at roughly room temperature. The weak topological phase—viewed as quantum spin Hall insulators stacked three-dimensionally 13 , 14 —will lay a foundation for technology that benefits from highly directional, dense spin currents that are protected against backscattering. 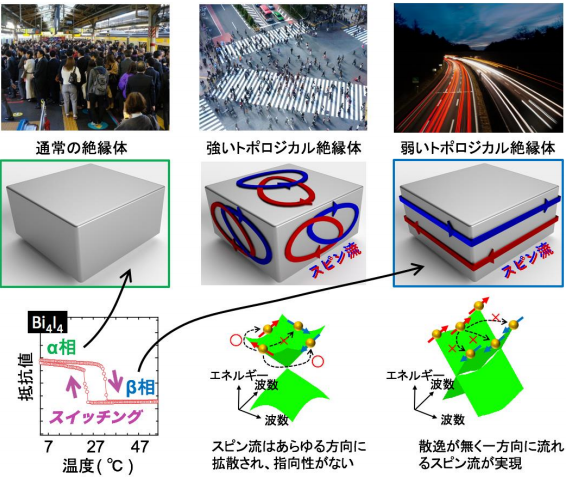 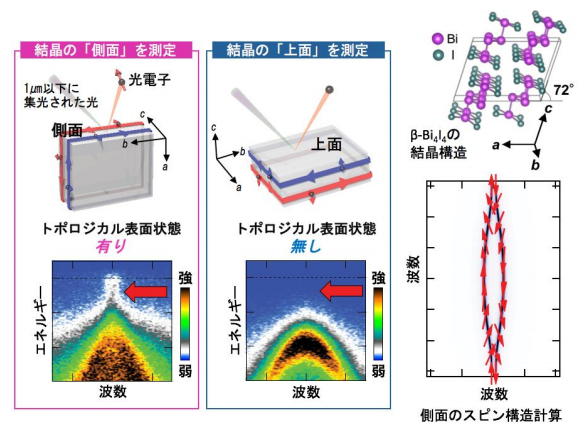