A step toward next-generation semiconductor devices

Since germanium (Ge) has approximately twice the mobility for electrons and four times the mobility for holes than does silicon (Si), it is anticipated as a next-generation semiconductor channel material, an alternative to Si. In the most advanced semiconductor research, core semiconductor technology, Ge-CMOS (complementary metal–oxide–semiconductor), is being developed. Furthermore, spintronics research on adding nonvolatile memory functionality through spin injection into Ge is also being performed all over the world.

A joint group of researchers led by Professor HAMAYA Kohei at the Graduate School of Engineering Science, Osaka University, and Professor SAWANO Kentaro at Tokyo City University, demonstrated spin transport in Ge-based micro devices. This group achieved this through the use of Ge-based spintronics devices with their own spin injection/detection technique in which high-quality spintronics material (Heusler alloy) and impurity doping on the Ge atomic layer were used in combination.

The group designed a device in consideration of relation between spin scattering and impurity doping levels in Ge, demonstrating spin transport in Ge-based electronic device structure at room temperatures, a world first. The group also experimentally clarified that the spin diffusion length in densely doped Ge at room temperature was approximately 0.5μm.

Ge is anticipated as a next-generation core semiconductor channel material. The establishment of spintronics, a revolutionary technique to add nonvolatile memory functionality into Ge, will realize semiconductors with high speed operations and low energy consumption. Resistance of the device structure developed by this group is lower than that of conventional tunnel barrier layer-type devices, so it is hoped that low-voltage-driven devices with that structure will be demonstrated as well. 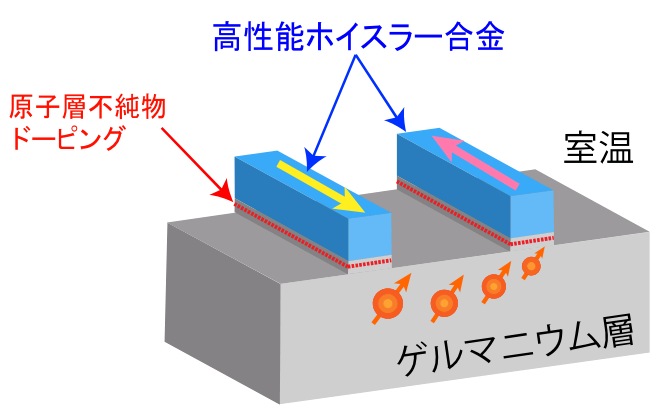 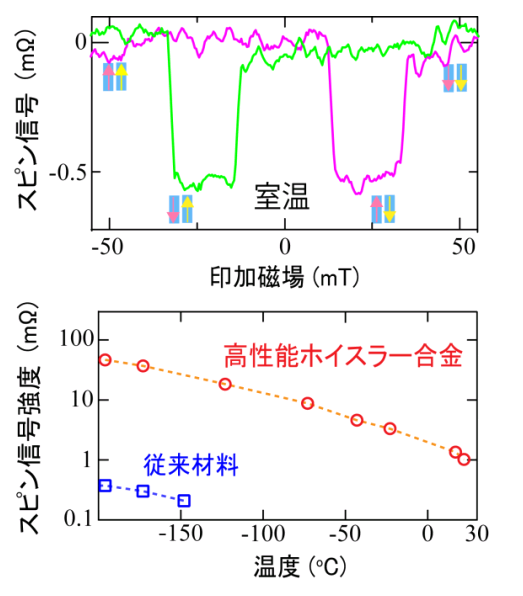 To learn more about this research, please view the full research report entitled “ Spin Transport and Relaxation up to 250 K in Heavily Doped n-Type Ge Detected Using Co2FeAl0.5Si0.5 Electrodes ” at this page of the Applied Physics Express website.