Adenosine triphosphate (ATP) is an energy-carrying molecule found in the cells of all living things. The energy released from the hydrolysis of ATP into ADP (adenosine diphosphate) and Pi (inorganic phosphoric acid) is used to perform cellular work. Researchers have ardently studied in order to understand ATP energy physically; however, it was not possible to explain experimental values in a quantitative way and the source of ATP energy remain unexplained.

A group of researchers led by Associate Professor TAKAHASHI Hideaki at the Graduate School of Science, Tohoku University, has enabled high-speed quantum mechanical/molecular mechanical simulation of ATP and ADP by developing their own parallel computation system. By combining this system, with its hydration free energy computational technique, with a high accuracy and high speed developed by Professor MATSUBAYASHI Nobuyuki at the Graduate School of Engineering Science, Osaka University, they succeeded in high accuracy computation of ATP hydrolyses in water.

From the calculation, they found that a great decrease in electronic energy and a great increase in hydration free energy of solute associated with the dissociation in ATP were compensated in solvent water. As a result, the mechanism behind the constancy of the free-energy release against the value of N e was clarified for the first time. This group’s achievement defies a number of articles about the release of energy from ATP described in biology textbooks.

As this group’s research results suggested that solvent water played a crucial role in ATP energy necessary for life activity, it is expected that energy theories on water, which exists in cells in large amounts but whose intercellular role is unknown, will be quantitatively discussed and its role will be clarified.

Hydrolysis of adenosine triphosphate (ATP) is the “energy source” for a variety of biochemical processes. In the present work, we address key features of ATP hydrolysis: the relatively moderate value (about −10 kcal/mol) of the standard free energy, ΔG hyd , of reaction and the insensitivity of ΔG hyd to the number of excess electrons on ATP. We conducted quantum mechanical/molecular mechanical simulation combined with the energy-representation theory of solutions to analyze the electronic-state and solvation contributions to ΔG hyd . It was revealed that the electronic-state contribution in ΔG hyd is largely negative (favorable) upon hydrolysis, due to the reduction of electrostatic repulsion accompanying the breakage of the P–O bond. In contrast, the solvation effect was found to be strongly more favorable on the reactant side. Thus, we showed that a drastic compensation of the two opposite effects takes place, leading to the modest value of ΔG hyd at each number of excess electrons examined. The computational analyses were also conducted for pyrophosphate ions (PPi), and the parallelism between the ATP and PPi hydrolyses was confirmed. Classical molecular dynamics simulation was further carried out to discuss the effect of the solvent environment; the insensitivity of ΔG hyd to the number of excess electrons was seen to hold in solvent water and ethanol. 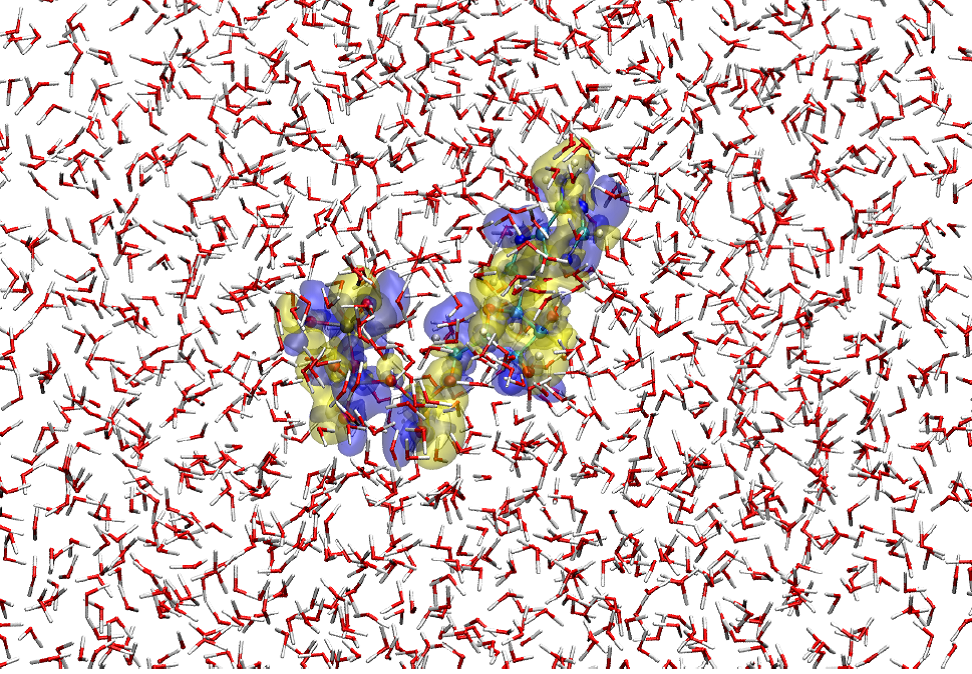 
A snapshot of the hybrid quantum/classical simulation for ATP 4- placed in water solvent. Here, the ATP solute is described by a method of quantum chemistry and the solvent water molecules are represented with a classical force field. The blue and yellow transparent surfaces show, respectively, the isovalue-surfaces of the increase and decrease in electron density by 3.0x10 -4 au relative to the average electron distribution of ATP 4- in the solution. Thus, the electronic state of the solute (ATP 4- ) as well as the molecular property of the surrounding solvent are faithfully represented in the simulation

To learn more about this research, please view the full research report entitled “ Drastic Compensation of Electronic and Solvation Effects on ATP Hydrolysis Revealed through Large-Scale QM/MM Simulations Combined with a Theory of Solutions ” at this page of the Journal of Physical Chemistry B website.