A wide range of applications, including recycling at home, is possible

A group of researchers led by Associate Professor UYEDA Chiaki , Professor TERADA Kentaro at the Graduate School of Science, Instructor HISAYOSHI Keiji at Osaka Prefectural Otemae Senior High School (visiting researcher at the time of research), verified that heterogeneous particles can be sorted by substance by the low field produced by neodymium (NdFeB) magnets.

The use of magnetism in solids was limited to ferromagnetisms that had a strong magnetic property. Most existing solids are categorized as diamagnetic or weak paramagnetic materials, so the possibility of magnetic motion has not been intensively considered for these materials.

This group studied what environment induces magnetic motion in diamagnetic and paramagnetic materials and tried magnetic separation of general solid particles during short-duration microgravity (μg) in a vacuum. This group set heterogeneous particles with diamagnetic and paramagnetic materials at a point in the magnetic field in a sealed vacuum apparatus and observed their motion during short-duration microgravity (μg). As a result, heterogeneous particles released from the same initial sample position started translation toward both inside and outside of the magnetic field. Eventually, the materials translated separately by substance and reached collecting plates. This separation was achieved because the speed of acceleration (a) is uniquely determined by magnetic forces attributed to substance-specific magnetic susceptibility (χ). a=χH (dH/dx)

Magnetic susceptibility (χ) of particles is available from the position where samples were collected and, from this value, particles can be identified. Furthermore, in this study, graphite particles, whose magnetic susceptibility is the largest among existing substances, were collected, thereby it was confirmed that magnetic separation of diamagnetic materials was realized by using their apparatus.

In recent years, as shown in magnetic levitation and the magneto-Archimedes effect, it was confirmed that the magnetic field also affects diamagnetic and paramagnetic materials by applying an ultra-strong magnetic field. In this study, the particles translated freely in a diffuse area in μg conditions. It is worth noting that ensembles of heterogeneous particles can be dynamically separated by the low field produced by NdFeB magnets during short-duration microgravity (μg).

Practical use of the magnetic field effect has been limited to substances with strong magnetism such as metal iron and sand iron; however, it is hoped that this group’s achievement will lead to a discussion about the feasibility of its use for all substances. It is hoped that this will lead to technologies of resource exploration and resource recycling as well as application to chromatography for solids.

Most existing solids are categorised as diamagnetic or weak paramagnetic materials. The possibility of magnetic motion has not been intensively considered for these materials. Here, we demonstrate for the first time that ensembles of heterogeneous particles (diamagnetic bismuth, diamond and graphite particles, as well as two paramagnetic olivines) can be dynamically separated into five fractions by the low field produced by neodymium (NdFeB) magnets during short-duration microgravity (μg). This result is in contrast to the generally accepted notion that ordinary solid materials are magnetically inert. The materials of the separated particles are identified by their magnetic susceptibility (χ), which is determined from the translating velocity. The potential of this approach as an analytical technique is comparable to that of chromatography separation because the extraction of new solid phases from a heterogeneous grain ensemble will lead to important discoveries about inorganic materials. The method is applicable for the separation of the precious samples such as lunar soils and/or the Hayabusa particles recovered from the asteroids, because even micron-order grains can be thoroughly separated without sample-loss. 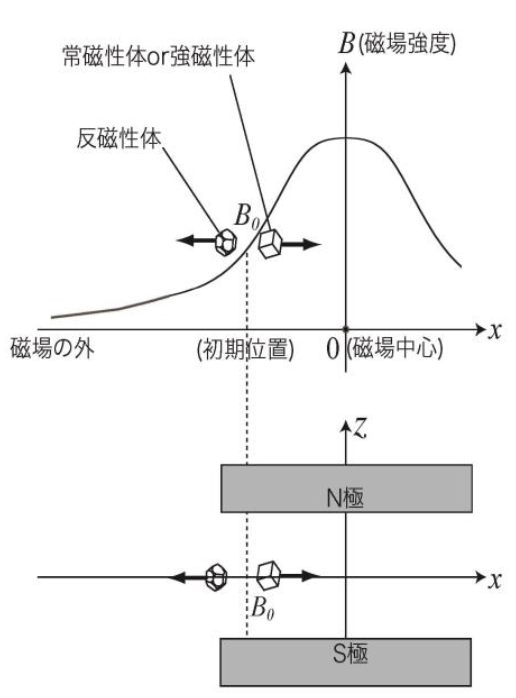 To learn more about this research, please view the full research report entitled “ Magnetic separation of general solid particles realized by a permanent magnet ” at this page of the Scientific Reports website.