Will lead to the elucidation of various protein functions

Protein is an important substance involved in various life phenomena, and its molecular structure is closely related to its function. In recent years, protein-structured drug development is actively being performed. Information about molecular structures of proteins is critical in the studies of biology, pharmaceutical sciences, and medicine. Generally, in order to know the molecular structure of a target protein, at least dozens of microns-sized single crystals should be made and then analyzed by X-ray or neutron diffraction.

However, the available protein driving force for crystal growth is weak, so even if environmental factors surrounding protein crystals, such as concentration and temperatures, are strictly controlled, it is occasionally difficult to gain crystals large enough for examining their molecular structures. The larger the crystal is, the more detailed molecular structure can be available, so a technique for making large protein crystals has been sought after.

(MARUYAMA Mihoko is currently a specially appointed lecturer at Kyoto Prefectural University and a researcher at the Institute of Low Temperature Science, Hokkaido University.)

This joint group discovered that a protein crystal with surfaces that were locally etched by photoinduced phenomenon of femtosecond laser ablation showed several-times enhancement of crystal surface growth. Interestingly, X-ray diffraction measurements of the grown crystals, including the ablated region by laser, did not present deterioration of crystal quality. Furthermore, examining this novel crystal growth by optical microscope and X-ray topography, this group found that a spiral growth mode with a big driving force was generated from the ablated region by laser.

No cases of flexible control over the size and shape of protein crystals as shown in this study have been reported, so these results suggest that this technique will become a breakthrough in creating large protein crystallization. It is hoped that this technique will be used for fabricating large single crystals of various proteins and be helpful for elucidating mechanisms behind various life phenomena.

Large single crystals with desirable shapes are essential for various scientific and industrial fields, such as X-ray/neutron crystallography and crystalline devices. However, in the case of proteins the production of such crystals is particularly challenging, despite the efforts devoted to optimization of the environmental, chemical and physical parameters. Here we report an innovative approach for promoting the growth of protein crystals by directly modifying the local crystal structure via femtosecond laser ablation. We demonstrate that protein crystals with surfaces that are locally etched (several micrometers in diameter) by femtosecond laser ablation show enhanced growth rates without losing crystal quality. Optical phase-sensitive microscopy and X-ray topography imaging techniques reveal that the local etching induces spiral growth, which is energetically advantageous compared with the spontaneous two-dimensional nucleation growth mode. These findings prove that femtosecond laser ablation can actively switch the crystal growth mode, offering flexible control over the size and shape of protein crystals. 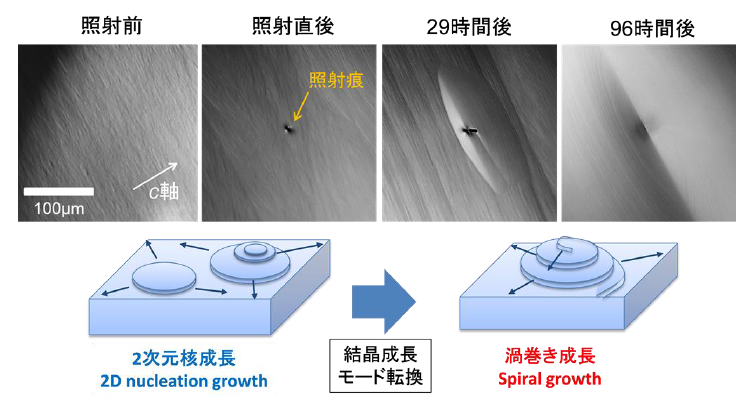 To learn more about this research, please view the full research report entitled “ Promotion of protein crystal growth by actively switching crystal growth mode via femtosecond laser ablation ” at this page of the Nature Photonics website.