From this, it is thought that the recognition of umami and sweetness in the gustatory insula increases neural activity in the gastrointestinal autonomic insula, regardless of whether one is hungry or full, resulting in the enhancement of appetite. It was thought the possibility of coordination of neural activity acted in the gustatory and gastrointestinal autonomic insula, but what coordination was caused and in what mechanism were not clear.

A group of researchers led by Specially Appointed Professor KANG Youngnam, Associate Professor TOYODA Hiroki, and Assistant Professor SATOU Hajime at the Course for Integrated Oral Sciences and Stomatology, Graduate School of Dentistry, Osaka University; and Professor SAITO Mitsuru at Kagoshima University, clarified that neural activity generated in the gustatory insula by administration of anandamide, or endogenetic cannabinoid, in a sliced rat brain was transmitted to the adjoining gastrointestinal autonomic insula, generating neural network activity of θ-rhythm coordination between the front and rear part of insular cortex. Furthermore, this group found that neural network activity between the gustatory and gastrointestinal autonomic insula was modified by feed-forward inhibition, succeeding in their visualization for the first time.

This study will greatly contribute to the clarification of brain mechanism of feeding behavior triggered by deliciousness. It is hoped that this study will lead to application research on control over binge-eating and obesity as well as prevention of lifestyle-related disorders.

Anandamide (AEA) and N-oleoylethanolamine (OEA) are produced in the intestine and brain during fasting and satiety, respectively. Subsequently, AEA facilitates food intake via activation of cannabinoid type-1 receptors (CB1Rs) while OEA decreases food intake via activation of peroxisome proliferator-activated receptor-α (PPARα) and/or G-protein-coupled receptor 119 (GPR119). Neuronal activity in the gastrointestinal region of the autonomic insula (GI-Au-I) that rostrally adjoins the gustatory insula (Gu-I) increases during fasting, enhancing appetite while umami and sweet taste sensations in Gu-I enhances appetite in GI-Au-I, strongly suggesting the presence of a neural interaction between the Gu-I and GI-Au-I which changes depending on the concentrations of AEA and OEA. However, this possibility has never been investigated. In rat slice preparations, we demonstrate with voltage-sensitive dye imaging that activation of CB1Rs by AEA induces θ-rhythm oscillatory synchronization in the Gu-I which propagates into the GI-Au-I but stops at its caudal end, displaying an oscillatory coordination. The AEA-induced oscillation was abolished by a CB1R antagonist or OEA through activation of GPR119. Our results demonstrate that the neural coordination between the Gu-I and GI-Au-I is generated or suppressed by the opposing activities between CB1R and GPR119. This mechanism may be involved in the feeding behavior based on taste recognition. 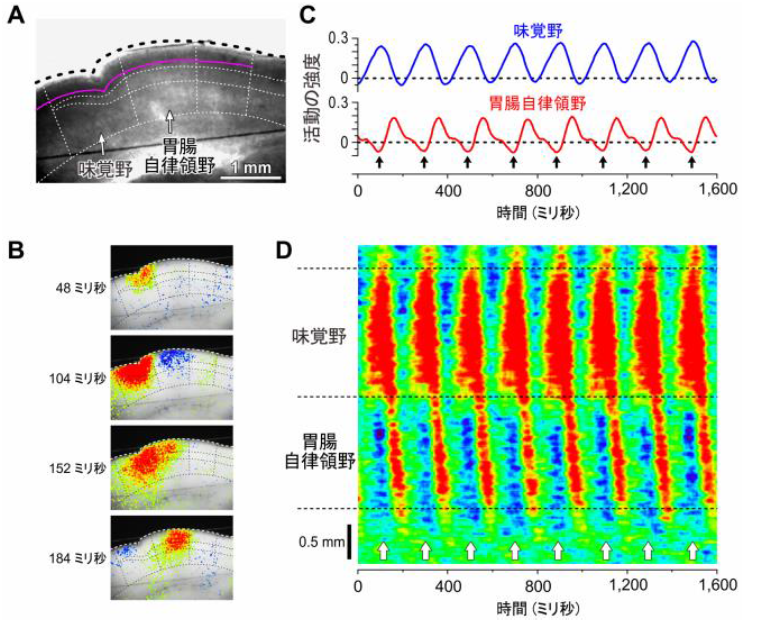 To learn more about this research, please view the full research report entitled “ A role of CB1R in inducing θ-rhythm coordination between the gustatory and gastrointestinal insula ” at this page of the Scientific Reports website.